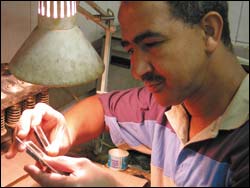 Can do: Geological sciences long-server David Wilson is now one of the foremost section technicians, having taught himself how to section, polish and grind valuable samples, from rocks to fish teeth and ceramics.

The diamond blade struck something hard. Drilling around the offending lump, he cut loose a stone of some worth.

"It was twice the diameter of a match head," he remembers. He's unsure what happened to it.

Like that diamond, Wilson had facets waiting to be cut and polished. He's quite a success story. Thirty five years ago, he joined UCT as a cleaner-cum-driver-cum-workshop assistant. Under the informal tutelage of Professors Mona Mathias and John Gurney, who took him under their wing, the affable staffer developed into a technican of considerable skill. Today he offers a sought-after service to the university community and beyond (the Universities of Stellenbsoch and the Western Cape are happy clients).

With a long track record, Wilson has a private store of anecdotes about life at a university. Many don't know that he's worked with lunar rock - pieces that told scientists the moon is an ancient planet, between 3 and 4.6 billion years old -brought to UCT for study. The sample was part of the 20kg or so gathered by the Apollo 11 astronauts, and so small and precious even the dust was gathered carefully and stored in sample packets.

Since then, Wilson has sectioned, shaped and polished a range of material, from the ceramic used in biomedical engineering, to concrete and fossilised dinosaur bones. Gurney used to send him rock samples from Siberia and Canada. He's even worked with the teeth of white steenbras. And just to show how highly postgraduates and staff rate of his work, his name has been listed in several academic publications.

Wilson's imagination has been as finely polished as granite over the years. Outside the workshop lies a collection of rock samples waiting for the attentions of his lathes and grinders. He collects a piece, dun coloured and mottled. His inner eye already sees the beauty, a microscopic kaleidoscope of colours as rich as silks.

"When you slice it, you won't believe the colours under the microscope."

A dyed-in-the-wool Capetonian, Wilson is also tied to the city's continuing history; his family having been removed from the stone cottages opposite Kirstenbosch. As a member of the Protea Action Committee, Wilson is confident the land offer on the table will soon be signed. This will take him and his wife, Georgina, and children Darryl, Emile (a fourth-year commerce student), and RochÃ© (studying social work at UWC) from Grassy Park back to a neighbourhood Wilson remembers from his childhood.

But that's another story. Today he's preparing for the brunch his colleagues have prepared to honour his achievements. The citation prepared for the recent long-service awards commends his artisanship, lauding his contributions.

"A hallmark of David's contribution to the department over his many years of service is his willingness to get involved with whatever needs doing. He has directly contributed to the graduation of literally hundreds of honours, MSc and PhD students for whom he has skilfully prepared samples for their subsequent analysis."