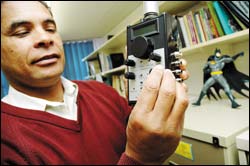 Associate Professor David Jacobs and his students probably didn't appreciate the moment in 2003 when they first captured a small yellow-bellied bat in the St Lucia Wetland Park in KwaZulu-Natal.

It was, after all, a dead ringer for the Scotophilus dinganii, aka Dingaan's bat, which is common in the area. Same features, including the distinctive canary-yellow abdomen, if smaller.

But after running the creature through the taxonomic keys that are used to identify species - these yardsticks cover everything from ears to tails, from nose leaves on the muzzle to wings and claws - the bat didn't, morphologically speaking, fit comfortably into any specific category. That's when the researchers from the Small Mammal Research Unit (SMRU) in the Department of Zoology first thought they were on to something.

Before the advent of bat detectors - super-sensitive microphones that can pick up ultrasonic sound - morphology was all scientists had to go on when classifying bats, says Jacobs. "So the bats were all lumped together, people thinking that they were the same species with a wide range in size."

But with their pocket-sized detectors in hand, the UCT researchers were able to, in a portable flight room, measure the frequency at which the new bats pitch their echolocation calls. Their calls were similar to those Dingaan's bats, they found, but at 44 kilohertz, around 10 kilohertz higher than their look-alikes.

In this day and age of genetic sequencing, the researchers could go even further to confirm their suspicions. They embarked on a collaboration with Geeta Eick and Conrad Matthee of the University of Stellenbosch, running a series of ecological, morphological, echolocation and genetic tests, sampling bats in the Kruger National Park and several sites in Zambia.

The genetic tests showed a 3% difference between the new species and Dingaan's bats. While there's no gold standard in what separates one species from another genetically - in some cases a 3% difference is ample, in others 10 or 12% is required - the results, when matched with their earlier findings, seemed overwhelming, said Jacobs.

In addition, ecological studies found that the new species did not have the same roosts as Dingaan's bats. The new species prefers the more traditional tree roosts, while their bigger brethren hang around in roofs of houses, often in thatch-roofs.

"These data all pointed in one direction," says Jacobs, "viz the existence of a second species within Scotophilus dinganii, thus confirming our earlier suspicions."

The discovery of the new species - the first in South Africa - was confirmed at the International Bat Research Conference in Poland last year.

There are still tons of unanswered questions, admits Jacobs. Like what caused the speciation, ie the separation of the species, between the new one and Dingaan's bats? And which species came first? And why, when interbreeding is possible - they live in the same neck of the St Lucia woods, after all - do the two species never mate?

"What we suspect is that the use of different kinds of roosts is what's maintaining the difference - why they don't intermingle," says Jacobs. "It may not be the cause of speciation, but it may maintain what we call their 'productive isolation'."

And, of course, they still have to be christened. Jacobs is leaning towards naming them after one of Dingaan's half-brothers, Shaka or Mhlangana, just to emphasise that the two are also sibling species.

One can but hope that the bats, unlike their human namesakes who turned on each other, will continue to live happily alongside each other. Even if it doesn't look like they'll be moving in together anytime soon.