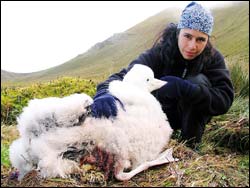 Deadly damage: UCT researcher Andrea Angel with one of the albatross chicks after it was attacked by mice.

UCT researchers attached to the Percy FitzPatrick Institute, working with the UK's Royal Society for the Protection of Birds (RSPB), have found that mice on Gough Island are attacking and devouring hundreds of thousands of chicks a year.

The mice, which are thought to have arrived from shipwrecks or on board the boats of whalers and sealers, are threatening the future of the endemic Tristan albatross, of which only about 2 000 pairs remain. Also under pressure is the endemic Atlantic petrel.

Gough Island, a World Heritage Site in the South Atlantic, is one of the most important seabird colonies in the world, hosting more than 10-million birds from 22 species, of which eight are globally threatened. The island hosts 99% of the world's Tristan albatross and Atlantic petrel populations - the birds most often attacked by mice.

South Africa maintains a weather station on the lonely island and each September the Antarctic re-supply vessel, the SA Agulhas, takes a new a team of meteorologists and support personnel to the island for a full year.

Wanless said: "There are massive problems with rodents on islands around the world, but Gough is the only known site where mice attack albatrosses. Once one mouse has attacked an albatross, the blood seems to attract others. They gnaw into the chick's body, create a gaping wound and the chick weakens then dies after several days. The petrel chicks die within a few hours."

Their research determined that about 1 000 Tristan albatross chicks are killed annually by mice. Last year, 60% of Atlantic petrel chicks were found to have died before fledging, probably because of mice.

Dr Peter Ryan of the FitzPatrick Institute, said: "Alien species are one of the biggest threats facing biodiversity globally. Their impacts on islands are particularly acute because island species have usually evolved without predators or strong competitors and so lack an adequate response to aggressive mainland species."

The predatory behaviour of the mice was first suggested by Dr Richard Cuthbert, a researcher from the RSPB who discovered unprecedented breeding failures of the Tristan albatross and Atlantic petrels when he visited Gough in 2000/2001.

Both the Tristan albatross and Atlantic petrel are winter breeders, and winters on Gough are mild compared to other South Atlantic islands. That may mean that many more mice are surviving the winter on Gough. On South Georgia for example, the mouse population crashes in winter to numbers so low that the mice do little damage.

As if this was not enough, these seabirds also face another serious danger from longline fishing. A longline comprises a main line with numerous branch lines ending in baited hooks. Seabirds are attracted to the bait and are accidentally hooked as "bycatch" as they attempt to swallow it. The ensnared birds are then dragged under and drowned as the fishing line sinks. Longlining has left 19 of the 21 albatross species facing extinction.