TB vaccine under the spotlight 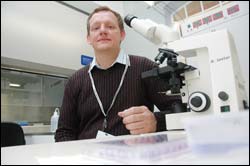 Cutting edge: Dr Willem Hanekom, who recently returned from the United States, says Cape Town is at the epicentre of TB vaccine research.

Cape Town is the right place to be - socially, politically, environmentally and professionally - for Dr Willem Hanekom who has returned from the United States to take up a fulltime position at UCT as associate professor and laboratory director of the South African Tuberculosis Vaccine Initiative (SATVI), at the Institute of Infectious Disease and Molecular Medicine.

Reflecting on his past few months back in Cape Town, there is, for Hanekom, "no doubt that this is the best decision I could have made. It has been very exciting work-wise. It is the best of all worlds to be here".

"I am extremely attracted to Cape Town - the place and the people. The challenges here are the right ones for me. I have also realised that Cape Town is the epicentre of TB vaccine research - if you want to do immunological research involving patients. There is nowhere else in the world with the infrastructure that our programme in Cape Town offers."

Along with the stimulating research environment offered in Cape Town, Hanekom feels as excited by the need to manage transformation within the laboratory itself. "We have multiple vacancies to fill in the lab, and we need to do this equitably."

During his 10 - to 11-year sojourn in America, Hanekom has maintained close ties with Cape Town through his involvement with, among other research projects, SATVI. This globally-funded cluster of research projects, led by Professor Greg Hussey with Hanekom in charge of the lab and immunological studies, is focussed on developing TB vaccines that are better than the current vaccine.

Hanekom returned to Cape Town regularly during the years he worked at Rockefeller University in New York, to work on a specific BCG immunology project. Now he has returned to see this project through to completion.

"BCG is also not without risk. It is entirely safe in the population at large, but if an immune system is compromised, it can cause disease. However, tuberculosis is the most common identifiable cause of death in HIV-infected children. We are therefore also studying the risks and benefits of BCG vaccination in HIV-infected children," he added.

Hankom's research enrols participants from a clinical site in the Worcester area. He has developed specific immune tests that use very small blood volumes for optimal results - thus minimising risk to new-born babies.

"World-wide, many people in clinical immunology research now want to use these sampling techniques."

Another facet of the SATV initiative is that of capacity-building, by establishing collaborative links with international scientists.

"This is not helicopter science," said Hanekom, referring to research where samples taken in the developing world are flown to the developed world for testing. "We are completing immune tests right here." His laboratory had some specimens in (very cold) storage on the day of this writer's visit.

"At SATVI, we run epidemiological, clinical and immunological studies. Ultimately, the aim will be to develop and test new vaccines that are better than BCG."

Along with lab management, Hanekom's work involves securing and managing large, competitive and collaborative research grants from around the world, which fund the research being undertaken. SATVI's funders include the Aeras Global Tuberculosis Foundation, the American government's National Institute of Health, and the European Union.

Hanekom completed his medical training at Stellenbosch and specialised in paediatrics at Red Cross where he was junior lecturer and registrar from 1990 to 1994. He then moved to Chicago to complete training in paediatric infectious diseases at Northwestern University's medical school. He then moved to New York to become a research associate in the Laboratory of Cellular Physiology and Immunology at Rockefeller University. Following that, he was assistant professor of paediatric infectious diseases at the University of Miami, prior to moving to UCT in February 2005.