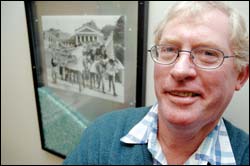 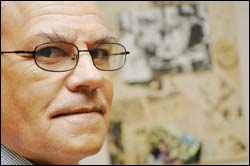 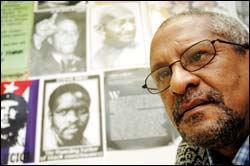 Old hands (from top): Glen Anderson, Trevor Davids and Manie Fagan have some memorable stories to tell of student activities over the past 35 or so years.

At the recent Youth Day seminar, three staff members from the Student Development and Services Department (SDSD) - Glen Anderson, Trevor Davids and Manie Fagan - were presented with recognition awards for their contributions to the university over the past decades.

The trio have been at UCT since before June 16, 1976 - they joined within a year and a bit of each other - and have a treasure of stories to tell.

Anderson, management accountant at SDSD these days, started at UCT as a student-loans officer in Bremner in 1969, back when fees were about R240 for the year (for comparison, note that Anderson earned the princely sum of R60 a month). When he moved to Student Affairs, as SDSD was then known, in 1982, there were but three staff members in the unit.

As treasurer, he had to sit in on meetings of the SRC, Rag and the Intervarsity Committee, which oversaw the annual rugby match between UCT and the University of Stellenbosch. It took students a while to warm up to him, though. "Whenever I walked into the room, the students would just stop talking," he recalls. That may well have been because of the blue safari suits, all but dress code among security police, he and others had grown partial to at Bremner.

In time, though, Anderson became a trusted co-conspirator. He recalls SRC president Glen Goosen calmly sitting across from him in his office while the police were prowling outside looking for the selfsame student. Little did they know that the blond Goosen had dyed his hair black.

Since he first started at UCT in 1969, Davids, now coordinator of the student societies, has experienced his share of change at UCT. He's also watched many current UCT executives and staff blossom as students and move through the ranks. He recalls a lean, athletic Hugh Amoore as the secretary general of the SRC, and other student leaders like Laurine Platzky, who now serves alongside another prominent student leader of the time, Geoff Budlender, on UCT Council.

He also remembers police and students clashing on Jammie Steps and the rugby field.

He had his own share of excitement manning the switchboard at the SRC office. Many times he would field a call about a bomb threat. On cue, police would arrive a few moments later, to all appearances looking for a bomb, but making good use of the opportunity to rifle through SRC papers.

"It was very hectic," Davids says.

Fagan, still in charge of printing at SDSD, became a target for the security police after he joined UCT's SRC Press in 1970, responsible for printing magazines, brochures and posters for the students. He worked alongside many SRC members, including ringleader Graeme Bloch, a speaker at the UCT Youth Day event.

Fagan recalls Bloch being beaten up by fellow students - "he always had run-ins with certain students" - and police. Oddly, (was it more than mere coincidence?) both groups meted out the same punishment on the short Bloch; they would lift him up by his feet and then bang his head on the ground.

Fagan became known as 'Mr Statement' because, as required by his job, he had to give regular reports to the police, on the lookout for subversive literature, about what gets printed and by whom. Most of the answers were scripted, of course.

"I knew exactly what to say because I knew what they were going to ask," he says.

What he didn't tell them about was the after-hours printing he did alongside some students. When his house in Heideveld was watched by police, he would clamber over his back walls, and run to where his lift would be waiting a few streets away to bring him to UCT.

"Those were hard times, nerve-wracking," Fagan reflects. But he also misses those hectic days, he says. Students these days are much too quiet.