The need for early warning 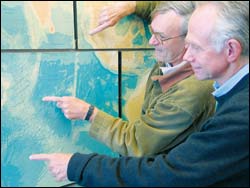 Epicentre: Professors Geoff Brundrit (back) and Frank Shillington, contributors to a paper outlining the feasibility of an early warning system of tsunamis in the Indian Ocean.

Though tsunamis are rare in the Indian Ocean - the biggest is thought to have followed the eruption of Krakatoa in the Sunda Strait in 1883 - early warning systems akin to those in the Pacific are vital, as the 2004 Boxing Day tsunami has showed.

There was no tsunami warning system in the Indian Ocean in the early hours of December 26 when the 900km-long fault off the west coast of Sumatra unleashed a mother of an earthquake, magnitude 9.0, the fourth largest recorded in the history of earthquake measurement since 1900.

Massive volumes of sea-water were displaced, shooting towards the surface like a cork. Satellite sensors imaged the resulting pattern of crests and troughs into the series of tsunami waves that devastated coastal areas throughout parts of the Indian Ocean.

When the news broke here, and even before the magnitude of the quake was known (over people were killed in Indonesia), UCT's head of oceanography, Professor Frank Shillington, wondered fleetingly if signs of the tsunami would show up along our coastlines.

They did, 11 hours later, recorded on the tide gauge at Richards Bay, and 12 hours and 22 minutes later at Port Elizabeth where the gauge picked up a flurry of wave activity, measuring peak heights of 2.5m every 40 minutes; the biggest waves measured by African stations. Even the tide gauge at Port Nolloth on the west coast registered abnormal tsunami wave activity.

"But we need faster communication of information," Shillington contends. He has thrown his weight behind the idea of an Indian Ocean-wide basin network of gauges. In the path of any tsunami, these gauges would provide fast rapid-sampling and real-time data, enough to warn coastal settlements in the way.

The majority of tide gauge stations transmit their data at hourly intervals. At this transmission rate, confirmation of the tsunami at Cocos Islands could have provided an early warning to the Maldives and locations further west - if a warning system had been in place. Similar transmitting stations in Thailand and Indonesia would have allowed for significantly faster warnings for much of the Indian Ocean.

This means additional- and more sophisticated - stations in the Indian Ocean, especially near Sumatra where large earthquakes are associated with subduction (where the edge of one crustal plate is forced below the edge of another) along the Sunda Trench.

Scientists from around the Indian Ocean, including Shillington, colleague Professor Geoff Brundrit and UCT alumnus Ruth Farre from the South African Navy Hydrographic Office, were quick to assess the sea level recordings taken after the tsunami made landfall.

Compiling this tidal gauge data from around the Indian Ocean region, principal author, Dr Mark Merrified (Oceanography Department, University of Hawaii), and his contributors were able to reconstruct the height and speed of the waves - and hence the time it took them to reach coastal regions.

They say these measurements could have given advance warning of the tsunami, had an Indian Ocean warning system been in place.

"This has provided the basis for recommendations on ways in which existing sea gauges can be enhanced and increased to establish a future Indian Ocean tsunami early warning system to avoid last year's devastation and loss of life," Shillington says.

Geophysical Research Letters recently published the article, submitted 40 days after the event, and now celebrated as a Journal Highlight by the American Geophysical Union.

Already two international coordination meetings have been held to thrash out an Indian Ocean Tsunami Warning System (IOTWS), the first in Paris in March and the second in Mauritius last month.

The tide gauge readings at South African harbours are certainly puzzling local oceanographers. The gauge records at Richards Bay and PE, separated by about 840km, are "surprisingly different" in both amplitude and frequency. Why were the waves bigger at Port Elizabeth and why did wave action persist for more than two days along our coastline?

"The signal at the PE gauge may have been amplified by the local continental shelf configuration, and if so, we want to understand why," Shillington remarks. "We will be investigating how local shelf interactions can be responsible."

South Africa's rugged coastline produces some very big wind wave action (probably why it hosts the Red Bull Big Wave Africa competition). The oceanographer's own PhD was on another type of wave: edge waves, and using this knowledge, he was able to disprove a theory that South Africa previously experienced a tsunami in 1981.

"The coastal tsunami wave pattern does not have a uniform expression; it can be high in one area and low in another," he noted.

"At Phuket, waves of 6.3m and 12m at Banda Aceh were estimated from the numerical models. We've not yet seen any local sea level data to validate these estimates."

Reports also indicate that sea levels oscillated with heights of 60cm off New Zealand and 40cm off Mexico.

"It was a truly global event," Shillington adds.

He believes that any early warning system introduced to the Indian Ocean basin can't stand alone.

"It must be connected to warnings of other extreme hazardous events, such as the tropical cyclones that habitually hit India and Bangladesh, killing thousands."

Since the Boxing Day tsunami, another earthquake on February 28, magnitude 8.5, rocked the same area, but the tectonic forces moved differently and did not displace such large volumes of seawater and no tsunami resulted.

But the real question is: where will the next tsunami come from and when?

The IOTWS points to the unique tectonic plate structure of the Indian Ocean and the two main tsunamic sources that could affect coastlines: the Indonesian seismic zone and its extensions, about in length, and the Makran source, an active subduction zone off the coast of Pakistan, where the Arabian tectonic plate slides beneath the Iranian micro-plate, representing a major fault line.

There is also a lesser-known possible local tsunamigenic zone off the Wild Coast south of Durban, where a large under-sea "slump" off the shelf slope could cause a tsunami.