The ups and downs of sport 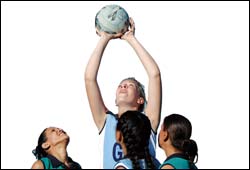 On the ball: Melanie de Beer shot UCT to victory

Most of the clubs are enjoying a break in the season as provincial events take centre stage for a few weeks. A couple of UCT teams were still in action, though.

Netball: In a stunning reversal of fortunes, UCT's first team rallied from a 28-59 hiding the week before to thrash Good Hope A 57-27 on May 14. Having sharpshooting goalscorer Melanie de Beer - she hardly missed the hoop against Good Hope - back from injury no doubt helped. That's a load off the mind of coach Louise Cameron, who can now concentrate on some other aspects of her squad's game.

Rugby: Injuries to its first- and second-choice tight heads did not exactly help FNB UCT in its game against Villagers on May 14, and the side disappointed again in a 10-30 defeat. Now on 12 points for the season - two wins and four defeats - the club lies second from bottom on the 10-strong Super League A1 log. It's not a train smash just yet, as there's just four points separating them from FNB Victorians in fourth-place. But, says Spencer King, director of rugby at UCT, players and staff realise they have to turn the season around really soon. "It's a tough league, and it's a hell of a fine line between victory and defeat. We just need to get back our confidence again."

Volleyball: On May 7, the Volleyball Club hosted its 2005 High School Tournament, with 20 teams going head to head in over 45 matches. High schools from around Cape Town participated in the event, sponsored by the volleyball club and Sasts Working Adventures. Teams from the club's development programme in Hout Bay, as well as the second UCT women's team, took part. In addition to forming part of its development and outreach programme, the tournament also raised funds for the club's tour to Port Elisabeth for the Sassu Inter-Tertiary Games in July.