Kopano celebrates spirit of past and present 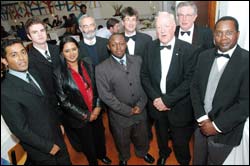 Old boys and new boys mixed for the first time when 50-year-old Kopano residence - originally a donation of army huts from the post-war government - hosted its first ever High Table dinner.

The event served as launching pad for an initiative by Kopano warden, Professor Evance Kalula, and students to put the current batch of residents in touch with alumni and leading professionals in the community, and that way foster some useful networking.

"This was really an effort to show how things were done in the past and to learn from it, and to show how some things have changed and how some things are the same," said Georgie George, deputy warden. "And we wanted to celebrate the special spirit of Kopano."