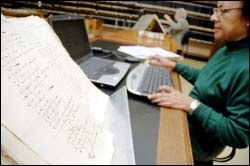 Digging into the past: Maureen Rall works here way through another tome from the VOC estate records, part of a R2-million transcription project between UCT and UWC.

Any historian looking for a snapshot - albeit a very detailed one - of the social and economic fabric of the Cape over the reign of the Dutch East India Company (the Verenigde Oostindische Compagnie, or VOC), could do a lot worse than start off with the tomes of the Orphan Chamber.

The chamber, a sort of a registry office for wills and estates in the colony, was said to have been set up to protect orphaned children and their inheritances against grasping relatives and friends. Over its existence, from the 1700s to about 1850, the chamber accumulated a goldmine of records. These included inventories of assets in which everything from crockery and belt buckles to livestock and slaves was painstakingly listed. In turn, auction rolls, also part of the collection, hold thorough records of goods, sellers, buyers and the prices that items and slaves fetched.

These days, the bulk of these documents is housed at the Cape Town Archives Repository in Roeland Street, Cape Town. Here, scholars and researchers comb through them daily for clues to the colony's cultural, economic and architectural pulse.

For genealogy-seekers, who regularly turn up at the repository, the books are invaluable. They are considered to be about the richest record of privately-owned slaves of the era, and just the ticket for tracing a family tree.

But scouring for specifics through row after row of bulky tomes is a no-no in these days of fingertip-ready electronic information. Which is why a R2-million transcription project between UCT and the University of the Western Cape (UWC) to make these records available on CD-Rom and the Internet is a godsend.

The 15-month project, overseen by Dr Antonia Malan of UCT's Department of Archaeology, was prompted by a widespread interest in the slave history of the Cape among researchers here and in the Netherlands, says Ellen Berends, the Dutch consul-general in Cape Town. It was Berends, a historian in her own right, who convinced her government to bankroll the initiative as part of an international drive by the Dutch to foster research in countries with which the Netherlands shares a common heritage.

Over the next year, a team of two editors and four transcribers from UCT and UWC will faithfully copy the hand-written Dutch entries of the Orphan Chamber documents into Corel XMetal, a software programme customised to the needs of the project. The National Archives of the Netherlands in The Hague will host the transcriptions on its website at www.nationaalarchief.nl, until such time as the National Archives of South Africa has the capacity to do so.

To spread the word about the digitised texts early, project members will host a number of workshops in local communities during 2005, with the first run on April 9. Already Iziko Museums of Cape Town and researchers at the University of Stellenbosch, among many others, have pricked up their ears.

"We chose the inventories because of the unique opportunity they gave to trace the passage of slaves from one family to another," says Dr Susan Newton-King of the UWC Department of History, one of the collaborators. "It's possible to do some quite detailed reconstruction of this passage through the material."

According to UCT's Professor Nigel Worden, who heads the project, the documents are testimony to the meticulous Dutch bureaucracy of the time, and researchers are grateful. The South African collection, by virtue of both its volume and condition, are unequalled and the envy of many a scholar.

"As far as I know," these records are absolutely unique in the kind of archives of colonial society during this period," he says. "North American researchers especially have been astonished by how good these records are.

"They would give their hind teeth for this kind of material."