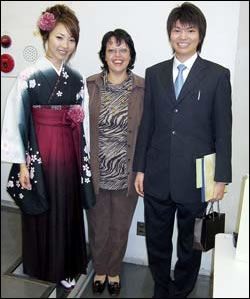 UCT's Terri Grant, one of the founder members of the Professional Communication Unit (PCU), now housed in the School of Management Studies, was invited to attend a Japanese graduation as a special guest.

"Fortunately, the 5th Asia-Pacific Association of Business Communication conference was due to start at the end of March so I was going to be in Tokyo anyway to deliver a paper", explained Grant. Her graduation hosts, Professors Hiromitsu Hayashida and Shun-itso Nagasako of the commerce faculty, were also the conference organisers.

Their commerce students were some of the thousands of students graduating on March 25, the end of the 2004 academic year in Japan. The time of year - also the end of the Japanese financial year - is regarded as highly fortuitous as it coincides with the cherry blossom season.

"It's spring, of course, and the time for re-birth, regeneration, new beginnings - they even have a holiday called Shumbun-no-hi to celebrate the spring equinox in March. Don't ask me to write that in Kanji, those Japanese characters. The graduation programme was just one big squiggle to me!" said Grant.

The most amazing part was the spectacle, she said, were the hundreds of young women dressed in richly-embroidered silk kimonos lining up to enter the hall.

"Not an academic gown in sight!" Most of the men wore dark suits but a few also chose ceremonial dress.

Once she and a few international and local dignitaries were seated on the stage of the vast gymnasium, the president of the university (their chancellor), followed by the equivalent of VCs, deans, department heads and so on, trooped on to the stage from the back, not the front as done here.

"What followed next was completely different to our procedures."

As their names are called, they bellow "Hai!" and then proceed onto the stage with great ceremony. One of the group acts as team leader and the movement into position takes place with military precision. One by one, they bow to the president who hands over their degree, plus some special certificate of congratulation. Warm applause follows each handover.

The rest of the horde disperses to separate lecture theatres where mini graduation ceremonies take place per faculty. This is much less formal and there is a great deal of back-slapping, bowing, posing for photographs, giggling, text-messaging - a national pastime - and smoking in the corridors!

To end, everyone congregates in the huge university cafeterias where tables laden with food and Asahi beer ensure a triumphant party atmosphere. Significantly, staff mingle with the students.

And the family in all of this? They sit in a raised back portion of the gymnasium for the main event and then seem to disappear, perhaps because as the beer flows, so the noise level rises and the students really want to let their hair down. Out of the blue at about 19h00 - a certain signal, perhaps? - the canteens empty and everyone leaves by taxi, train, monorail or bus.

PS: The public transport systems are quite superb and why bother with a car when there's no parking anyway? Sayonara!