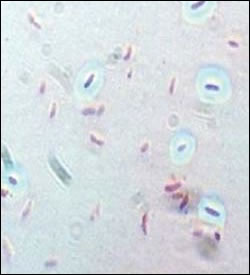 For much of the time, humans get along pretty well with Bacteroides fragilis.

Which is odd, given that the bacterium makes up about half of the 500 bacterial species found in the faeces that is stored in the large intestine. But, here in the large intestine, B fragilis remains largely harmless. In fact, it even comes in handy occasionally - it's said to aid in the production of vitamins, helps with digestion and also keeps other bacteria, like those from the nasty Salmonella family, at bay.

"For the most part, we're happy to have them," says Dr Sheila Patrick of Queen's University in Belfast.

But with B fragilis, as with real estate, it's all a matter of location, location, location. Given the opportunity, as often happens after a burst appendix, childbirth or bowel surgery, the bacterium escapes from the gut and makes its way into sterile areas of the body.

It first eludes the body's immune system and then triggers a rash of life-threatening infections. Without treatment, many die. One 1995 study in the US reports a mortality rate of anywhere between 13-33%, while others record even higher numbers.

"Each one of us is at risk from this kind of infection because we all have these bacteria in our gastrointestinal tract," says Patrick.

In rural areas, like those in South Africa, B fragilis causes additional worries, adds Dr Val Abratt of UCT's Department of Molecular and Cellular Biology, one of Patrick's co-researchers. In such out-of-the-way regions where only rudimentary health care services are available, the condition often goes undiagnosed.

Thanks to the miracle of antibiotics these infections are perfectly treatable today (although the drugs came too late for the likes of Harry Houdini, who reportedly died from a B fragilis infection).

But, as has become rote among bacteria, B fragilis is building up resistance to antibiotics, in fits and starts only to the frontline drug metronidazole (commonly used as a prophylactic before surgery), but much more so to inferior substitutes that are rife in countries like China.

To amp up the fight against infections from B fragilis, Patrick, Abratt and their colleagues from South Africa, Northern Ireland, Scotland and Wales sequenced the bacterium's genome at the Wellcome Trust Sanger Institute, a genome research centre in Cambridge in the UK. That process was invaluable.

The scientists found that B fragilis dupes the immune system by flip-flopping pieces of DNA and so varying its surface molecules. Even one strain of B fragilis can generate a host of surface components, such as proteins and molecules known as polysaccharides, which helps it to escape detection, the authors noted in a paper recently published in the journal Science. This smoke-and-mirrors act echoes that of Salmonella, the only other bacterium known to hide from the immune system by way of such genetic camouflage.

Abratt and Patrick will now be front and centre in the next step of the project, that is, to use the genome findings to come up with a better drug against B fragilis. "The idea is to pre-empt the antibiotic resistance," says Abratt.

For the time being, metronidazole does a very good job of curbing infections. The fear is that, as more countries - out of necessity - trade up and more people begin to use the drug, the bacterium will become increasingly resistant to even metronidazole.

For the scientists, it's now a battle against the clock.