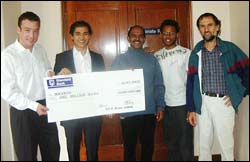 RAG, UCT's student fundraising organisation, has handed over a cheque of R1-million to the Student Health and Welfare Centres Organisation (SHAWCO). Each year, RAG raises money through a slew of projects such as Sax Appeal magazine and the RAG Floats Procession, with proceeds going to SHAWCO for its many community programmes.

The big money-spinners for 2004 were the sale of Sax Appeal, which raked in R365 000, and end-of-orientation Big Bash party, worth another R193 000. The R1-million take is up some 50% on the previous year's tally, reports RAG. Sharand Maharaj, 2004 RAG chairperson, puts the feat down to "the selfless dedication and hard work" of his committee, and the many students who volunteer their time and energy.

SHAWCO, on the brink of folding just two years ago, is very grateful for that enthusiasm. The RAG million makes up around 30% of its annual budget, and foots a whole lot of bills.