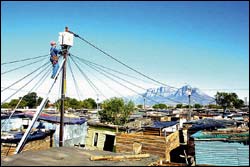 Light savings: Along with the need for electricity in the city's townships is a commensurate need to save energy, this according to a study by the Energy Research Centre, which uses Long Range Energy Alternatives Planning, a set of simulated scenarios for Cape Town's energy development over the next 20 years.

Cape Town has an opportunity to become a leader in addressing greenhouse gas emissions, eliminating much of the "brown haze' that blankets the city on still, hot days, this according to a study by UCT's Energy Research Centre (ERC), based in mechanical engineering.

Using Long Range Energy Alternatives Planning (Leap), the study has developed a range of simulated scenarios for Cape Town's energy development over the next 20 years, based on changed energy patterns and policy interventions. These will be vital to offset rising energy consumption that accompanies growing population levels and allied economic activity.

Energy savings are also vital to the city since it depends on imports of both electricity and liquid fuels.

According to the ERC's Richard Drummond, huge energy savings can be made from modal shifts in the transport sector and by introducing more efficient lighting.

Cape Town has already adopted a City Energy Strategy that aims at a 10% renewable energy target by 2020. Implementation will mean significant costs, which can be offset partly by selling carbon credits. Carbon credits are credits for reduction of greenhouse gas emissions, which can be sold by developing countries to industrialised countries who need to meet a climate change target.

The report identifies a number of policies that are sustainable, in others words, viable in terms of costs, social benefits and their effects on the environment.

The largest savings, say the researchers, can be gained by a shift from private to public transport. And here they cite potential savings equivalent to 36-million litres of petrol and diesel in the first year.

Improved public transport will mean more electric trains and any electricity savings gained will have to be offset against this increase. Nonetheless, savings in this area can be gained by switching to more efficient lighting. In the commercial sector, R144-million could be saved over the projection period of 20 years. More efficient heating and air conditioning could save R32-million in the commercial sector and R1.3-million in government buildings alone in the same period.

Within individual households (and here the researchers are keen to introduce savings to low-income houses in particular), savings of R75 a year can be achieved simply by installing two compact fluorescent lamps (CFLs), at a cost of about R30. The payback periods for ceilings and solar water heaters (SWHs) they recommend are expected to be longer. To help poorer households, the researchers are suggesting that local government should consider subsidising the capital costs of these interventions.

The potential for energy saving through solar water heaters is largest in the medium- to high-income households where geysers are the single biggest guzzlers of electricity.

However, the proposals will require a substantial investment. The estimated total capital cost of implementing the renewable energy target is in the region of R4 370-million. But, says the research team, this figure should be viewed against the alternative: building a coal-fired power station in the city.

It should also be viewed against another factor: the city could earn revenues of R700-million by selling carbon credits over 20 years by reducing greenhouse gas emissions, providing - approximately 17% of the total capital costs.

In the short term, the report points to energy saving measures that can be implemented immediately, like compact fluorescent lamps in residential, commercial and government sectors and through efficiency improvements in heating, ventilation and air conditioning equipment in the commerce and government sectors.