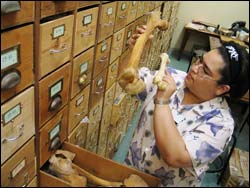 Old bones: PhD student Jacqui Friedling compares the femur bones of a giant and a dwarf.

Bones flesh out the gaps in the city's history

Someone who disagrees is PhD student Jacqui Friedling, resident in the human biology department. Here, she's made a career of unraveling the details of dead men's lives by analysing their bones and teeth, especially eighteenth and nineteenth century remains from the city's burial grounds.

These remains tell her plenty: how people died, what work they did, what they ate and what diseases they succumbed to.

As for her analyses of old bones and teeth, what are these forensic tales really worth? As Friedling explains, they help us put together a more holistic history of the city and its people.

"The history of Cape Town is critical in building a sense of civil wholeness in order to break free of the apartheid stereotypes of the past."

The topic of bones was spotlighted at her recent Potter seminar. One of five Potter Fellows, the seminar was part of her academic commitment to her benefactors, through the David and Elaine Potter Fellowships.

Community outreach is another important aspect of her fellowship and she finds her work in the field deeply enriching. Friedling visits schools on the Cape Flats, broadening pupils' understanding of the many study and career options open to them.

"You study what?" was the response from a grade 10 pupil in Belhar, who was gobsmacked to think that anyone could make a career of studying bones. On her part, Friedling was surprised to find that biology teachers didn't know that biological anthropology was a viable career.

"The amount of information that can be gleaned from the humble bone actually astounds students and teachers alike," she adds.

Putting the puzzle together is what drives her.

"What is manifested in the physical and behavioural characteristics of any living being is the result of the intermingling of an inherited genome with environmental factors,' she explained. "Environmental forces influence bones and teeth. Bones respond to the mechanical forces and alter in response to activities and stresses, and can tell us about the lives of earlier peoples."

Bones give an indication of growth, stress, disease and lifestyle factors. The age and growth of a sub-adult, for example, can be determined by examining dental development as well as the length of the long bones and the union of the epiphyses. In adults, the keys are landmarks on the pubic symphysis, cranial suture closure (where the bone plates join), degenerative changes and the reabsorption of cancellous bone.

In addition to changes resulting from normal biological processes like growth and ageing, the bones and teeth also show the brunt of stress, brought on by cultural practices (such as carrying loads on the head) and pathological conditions.

One example of the latter can be found in bone lesions identified by the spongy, porous nature of the roofs of the eye orbits and cranial vault, which are associated with iron deficiency and which result in pressure being exerted on the tables of the compact bone by the expanding marrow.

Diseases like osteoarthritis are also evident in the bones. Likewise, dental disease reflects the physical evidence of dietary and non-dietary behaviours.

These days one might associate osteoporosis with post-menopausal women. But Friedling points out that men account for a growing proportion of cases. Thirty percent of men develop osteoporosis as a result of lifestyle choices: drinking and smoking.

Occupational stress also marks the bones. Enthesopathies (musculo-skeletal stress markers) can be seen as rough patches and bone projections at the insertion of tendons and ligaments. These develop as a result of prolonged and excessive muscular activity, a result of increased mechanical loading.

Down in the bone room of the Anatomy Building, Friedling shows off some of the more unusual specimens from those who lived and died in the Cape; the femur (upper leg) bones of a giant and of a dwarf. She runs a finger over the grooves worn into the giant's bones, probably the result of an overdeveloped attached muscle and a likely indication of a lifetime of heavy work.

These days, no doubt, he would be put to work wearing a scrum cap. 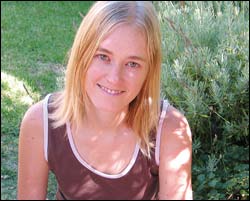 Kids talk about growing up in Cape Town

While the first 10 years of democracy has quickened change in the broader political, social and economic arenas, researchers know little about the factors shaping the everyday lives of our country's youth.

How do they view their current lives and prospects? Will they make the transition from school to work or further study successfully? What factors in their personal lives and communities enable or hinder them achieving their goals?

It was master's student Sue Moses' abiding interest in social development (she'd always wanted to work for the non-profit sector, more so with children) that brought her to these "gaps in our knowledge".

Moses form part of the qualitative research team at The Centre for Social Science Research (CSSR) conducting the research project, Growing Up in the New South Africa: Perspectives from Children and Adolescents in Cape Town, recently presented at a seminar, a mandatory part of her David and Elaine Potter Fellowship.

According to the team (including Dr Rachel Bray and Imke Gooskens), "children's lives are considerably under-researched in South Africa".

"Currently we have no up-to-date information on the everyday lives of children and adolescents in the Cape Town area. Yet knowledge of their experiences at home, school and in their 'communities' can tell us about their current well-being, as well as the factors shaping their transition to adulthood."

Moses believes that the findings of the study will provide a useful comparison to the Birth-to-Twenty study in Gauteng, a longitudinal survey of children born there in 1990, as well as projects like the Durban-based Transitions to Adulthood panel study.

"At this point [in our history] we would expect that policies intended to address social inequalities should be beginning to bear fruit," Moses adds. "Research that investigates the lives of children living in diverse but geographically-close communities can shed light on the extent to which these policies are helping achieve the desired change."

The CSSR research project integrates quantitative and qualitative data, the former generated by an ongoing panel study, the Cape Area Panel Study (Caps), started in 2002. Almost 5 000 young people aged between 14 and 22 (in 2002) will be interviewed five times over seven years.

The qualitative data has been collected in three field sites, the geographically-close communities of Masiphumelele, Ocean View and Fish Hoek. Using participatory methodologies Moses and her colleagues have worked extensively with children from grades 5 through to 12, to build a picture of how children experience their lives, and the various roles played by home, school and community structures (both formal and informal). The importance of relationships and how children negotiate these is emerging as central to understanding factors that enable or hinder children in succeeding.

During some drawing work, Moses got the Ocean View grade 9 pupils to construct community maps of their neighbourhoods; using different colours to depict various areas: yellow for fun places (soccer field, play park, library), blue for important places (schools), green for places to get things (shops and spazas), and red for dangerous places (shebeens). Discussing the maps with the children enables one to get a sense of children see and negotiate their environment.

One map is completely red, flagging a scattering of the community's riskier locales: the car racing track in Soetwater, the rubbish dump, a very poor neighbourhood on the outskirts of the community, and the shebeens.

Despite their sometimes bleak social and economic circumstances, Moses was also heartened by what she has heard and seen during ten-weeks of fieldwork sessions.

"The children have to deal with a lot. But we continually meet kids who are really positive and determined to make it."