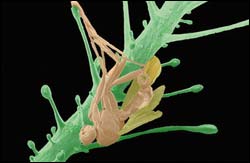 Life on a Sundew: A small fly caught in the sticky covering of a sundew leaf. (The competition is run by the South African Agency for Science and Technology Advancement. There were four sections to the competition, including Science in Action, Science as Art and Scientists at Work.)

For researchers who photograph the miniscule details of life and form seen under the microscope, the images are often nothing short of art. This is probably why postgraduate researchers in the health sciences and sciences spheres successfully pocket most of the prizes in the annual Science Close-up category of the SA Science Lens photographic competition.

Miranda Waldron (Electron Microscope Unit) won first prize for her Life on a Sundew, a picture of a small fly caught in the sticky covering of a sundew leaf. The tiny sample was frozen (in order to be put in a vacuum) and Waldron did not notice the miniscule fly until the leaf was viewed with the electron microscope.

She also secured a "highly commended" rating for Shark Skin, a magnified image of sharkskin, showing the similarity to the fabric used for top swimmers' costumes.

"Little is known about molecular mechanisms and how the complicated structure of the eye's cillary body takes shape during embryonic development. Less is known about the molecular processes during this process,' he said.

His image is striking as it shows the irregular woven network in the mouse's cillary tissue, the first time this has been characterised in mammalian models. Humans, for example, have parallel folds. Reseachers now want to know whether there is a functional significance to the irregular formation.

Professor Anusuya Chinsamy-Turan (zoology) also won a "highly commended" award for her close-up of a thin section of a Late Cretaceous ornithominid dinosaur from China.