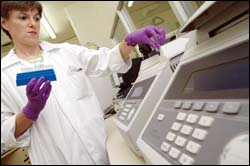 For equipment that may well put the brakes on a killer disease, thermocyclers could not be more unassuming. Compact and grey, at first glance they can easily be mistaken for dated cash registers.

But for the millions in the country and province infected with tuberculosis - a world-high of 1 000 people in every 100 000 in the Western Cape - these drab little machines are lifesavers.

No surprise then that staff from UCT and the National Health Laboratory Service (NHLS) came out in force to thank executives from the Rotary Club of Passau in Germany and the Rondebosch Rotary Club who recently donated two thermocyclers to the NHLS labs at Groote Schuur. The machines, valued at about R66 000 apiece, will replace the lab's old thermocycler and vamp up its critical work on tuberculosis.

A hitch in the diagnosis of many diseases is that often there aren't detectable volumes of the triggering bacteria or virus in a test sample, explains the NHLS' Maureen Lambrick. That holds true for Mycobacterium tuberculosis, the bacterium that causes TB, as well. "What you're looking for is a fragment of DNA that's specific to TB, but you need lots of it," says Lambrick.

Using a cascade of traditional cultures and biochemical tests, it can take up to seven weeks to confirm a clinical diagnosis of TB. During that lull, patients go untreated and are likely to pass on the disease.

Thermocyclers slash the testing time by at least two weeks. Through a method called the polymerase chain reaction (PCR), the machines - which handle some 90 samples in one go - can make multiple copies of Mycobacterium tuberculosis DNA in the space of an hour. "So you could end up with millions of copies of the DNA fragments instead of just one or two," says Lambrick.

That's a huge step forward in efforts to check tuberculosis, says Dr Denise Roditi, business manager at the NHLS. "The quicker you do the diagnosis, the quicker you can treat the patient."

And that's much to be grateful for.