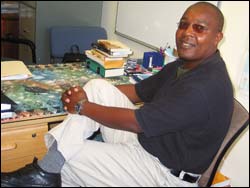 Dr Owen Sichone (above), a Mowbray barbershop (right), and (below) Somalian sweet vendor Ahmed Hirsi (left), who studied accountancy at university and wants to get back to higher learning.

Despite our proud reputation as a model democracy, apartheid has been replaced by xenophobia as the evil that best describes South Africa's relations with African refugees and immigrants. Senior lecturer in social anthropology Dr Owen Sichone has written a chapter on the broader theory of globalisation and at the specific experiences of Africa by looking at the experiences of young immigrants in "global Cape Town".

His work, a chapter titled Together and Apart: African Refugees and Immigrants in Global Cape Town, is part of a book that developed from a Human Sciences Research Council (HSRC) project with Professor David Chidester. It responds to a question that emerged from Beyond Solidarity Conference: What holds South Africans together?

For Sichone the topic of African immigrants and refugees holds more than cursory interest. A Zambian, he read for his PhD at Cambridge, his dissertation also concerning the migration theme, specifically the return migration of Zambian mineworkers who'd spent a lifetime on the Copper Belt. After a stint back in his native country, he moved to Johannesburg and spent four years at Wits. He also worked briefly in Zimbabwe for a regional NGO, the Southern Africa Policy Research Institute. In 1998 he headed south to Cape Town and UCT.

In his research on xenophobia, Sichone said that although South Africa has been a place that has welcomed immigrants "of one sort or another" for hundreds of years, it has now become less open to strangers even as it has become more attractive with the advent of democracy.

"Thus the country that has one of the most democratic constitutions around the world – stands accused in the eyes of many, especially on the continent of Africa, and [as] a country that frequently tolerates the violation of human rights, dignity and security in the name of controlling the influx of African migrants."

Sichone's survey honed in on the immigrant and refugee communities in Mowbray, though his research involves a good deal of footslogging to seek out these communities in Muizenburg and Paarl. Even the Northern Cape has a significant community of refugees and immigrants.

Though the study for this chapter was small ("It's work that begs a proper survey"), Sichone's project looked at various groups: parking lot attendants, car guards, street vendors and hairstylists - young, mobile men who understand the global economy, he said. His ongoing project has also looked at South African perceptions of foreigners, both European and African, and the family situation of migrants from Dar es Salaam. He plans to extend it to look at Senegalese Murid (the largest Muslim sect in Senegal) traders in Cape Town with a view to contributing to the study of grassroots globalisation and the informal sector.

"The media doesn't portray the full complexity of who these people are and how they survive in foreign countries."

But they are badgered by local men ("They steal our jobs"), and undermined by perceptions that dog their success. Foreign Africans, say local men, are better qualified, not having borne the burden of apartheid, which undermined their education. They are also accused of riding on fake qualifications. South African employers in commerce and industry, predominantly white, allegedly prefer to employ illegal or undocumented migrants. They are seen to be docile, willing to accept lower wages, even for work in dangerous conditions and they are not unionised.

One of his case studies, Mr MJ, says the local car guards insist on taking all their sick leave, especially after a weekend drinking bout. "They thus do not save and live from hand to mouth." They are surprised to see that foreign Africans who arrive "with nothing" as asylum seekers soon have more resources than their hosts.

"Mr MJ described how surprised his fellow guards were when they found that he lived in a furnished flat and even had a telephone."

These refugees are not necessarily better workers, Sichone noted. "Their circumstances demand greater discipline and sacrifice in order to pay monthly rents, which they say are higher than those paid by nationals, and to maintain their cell phone and Telkom lines, without which they can't keep contact with their network of friends and relatives here and abroad."

Mr C is a young man who opened his barbershop with three low-quality shaving shears, a few mirrors and old sofa, no washbasin and no hair grooming products. Clients are cleaned off using powder applied to a paintbrush. And instead of aftershave he uses meths. He provides only those hairstyles shown on a poster, featuring African sports stars in Europe, African American NBA stars and Hollywood stars like Will Smith. After about a year he added a TV and stereo player to his equipment. His two employees are fellow immigrants. He now stocks sweets and soft drinks.

But the business also provides an opportunity for the proprietor to carry on other activities using it as a front. For example, said Sichone, one popular shop owned by young Congolese men in Durban Road in Mowbray also functioned as a shebeen. It was popular with students but a series of police raids resulted in its closure.

Most of the cigarette and sweet vendors along the Main Road were of Somali origin and those who sell leather goods tended to be West Africans, particularly Senegalese.

"Thus we can see the division of labour or ethnic specialisation," noted Sichone. "Congolese are car guards and also run the barbershops, the West Africans are in the hair salons and in street vending. The Somalis are in street vending, and to some extent, have managed to penetrate the minibus taxi industry."

But the social anthropologist also ponders a more intriguing facet to these African migrants - the little studied phenomenon called xenophilia, the love for the foreigner that is also part and parcel of the encounter between foreign Africans and locals.

What intrigues him are the marriages and romances between African migrants and South African women. To illustrate this he refers to two sisters. Both are coloured and married Congolese men.

"This preference for foreign men also makes it possible for the refugees who do not have families here to find a place for themselves in the new society," Sichone explained.

In his case study, both women later divorced the men, having been assaulted by their Congolese partners. Nonetheless, they put on weight (to acquire what they considered an "African look") and continued seeing other Congolese men. Other marriages between locals and African migrants Sichone has come across in the Mowbray area were also characterised by violence from time to time.

The myth, he maintains, is that local women believe these foreign Africans know how to treat women and are less prone to violence. Another reason cited is that they are "corrupted with gifts of money", so the local men complain. Given their financial constraints, Sichone suggests there is more to such relationships than economic exchange.

"The attraction appears to be due in part to the fact that they are foreign, they are new, they speak a strange language and they express their love in new and unusual ways."

However, the presence of new arrivals on the South African landscape is not always characterised by violence.

"Yes, sometimes African migrants are thrown off trains but so are local people. Sometimes, as we have shown, marriages and new offspring result from the coming together of foreign Africans and South Africans and this is not new, even though for this generation it is providing new and unprecedented social questions to be answered."

Some of the foreign Africans use South Africa as a base, to brush up their English and acquire further education or technical skills. South Africa becomes a runway, a launch pad into Europe and America. "Clearly what they're doing isn't usual migrant worker stuff," Sichone explained. "They have an idea of how the global economy works."

And although they're mobile, they still have close ties to home. The Somalis, for example, rely on a network across the world and are in constant e-mail or telephonic contact and have kept their identity alive by exchanging video tape recordings of their family histories.

Though incidents of xenophobia are legion, Sichone wants to show the other side, the xenophilia that has characterised many of the city's contacts with strangers from the north. There is the possibility of hostility but also care and support, the latter lesser known. "Journalists are not interested in good news," he says wryly.

"My concern has been to bring these stories out without undermining the xenophobia debate."