Dictionary on ocean things a first for South Africa 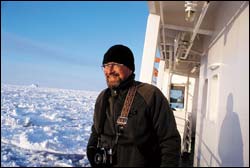 Putting in all to paper: "Since oceanographers go to sea, it covers a host of maritime and shipping terms ..." - Prof Johann Lutjeharms.

A UCT oceanographer has turned his hand to lexicography.

In April, Professor Johann Lutjeharms of the Department of Oceanography celebrated the publication of the Dictionary of Oceanology/Oseanologiewoordeboek - a 20-year labour of love that is also the first dictionary of its kind in South Africa. The 334-page volume, released by well-known publishers of dictionaries, Pharos Publishers, gives the Afrikaans equivalents to English terms.

The book costs only R175, and can be found in all leading bookstores.

Lutjeharms explains that he first started compiling a short list of Afrikaans terms in oceanography for his own use - many Afrikaans technical words were simply not known to him, he says. This collection of words and phrases soon swelled into a small card index ("this was before the onslaught of the desktop computer") that grew steadily as people approached him with terminological problems. The index, in turn, snowballed into a fully-grown electronic database. With the help of a few UCT postgraduate students and the publishers, this database was then transformed into a proper dictionary.

Although an oceanographer by trade, Lutjeharms opted to revive the term "oceanology" - a word popular in the Soviet Union during the Cold War era, which may explain the bad rep it received among western scientists and why, for so long, they snubbed its usage - when he titled the book. While the word "oceanography", technically, alludes to the description of marine features, oceanology refers, more expansively, to the science of the ocean in general.

"It turns out that this dictionary covers a much greater disciplinary expanse than just normal oceanography," Lutjeharms says. "Since oceanographers go to sea, it covers a host of maritime and shipping terms; since oceanographers use a host of different sets of equipment, equipment terms have been included; since the ocean is strongly influenced by the overlying atmosphere, marine meteorological terms are to be found here as well.

"I really felt that I wanted to include everything that someone who goes to sea or somebody who works in the navy would want to find there. It doesn't just stick closely to what, from a discipline point of view, one would call oceanography. So it includes shipping terms, naval warfare terms and others - it's much broader."

The aim of the dictionary, adds Lutjeharms, is to be as user-friendly as possible, and is aimed at the needs of South African marine scientists in particular.

Although the "mammoth task" has taken two decades to complete, Lutjeharms - despite an immediate impulse to protest, "Never again!" - has another lexicographical leviathan waiting in the wings.

Recognising that current computer technology might speed things up considerably and that other indigenous languages such as Zulu and Xhosa lack such technical terminology, he is thinking of a four-language dictionary of just the key terms of the ocean sciences.

A Zulu colleague has shown an interest, but the two are on the lookout for a Xhosa expert to lend a hand with the task.