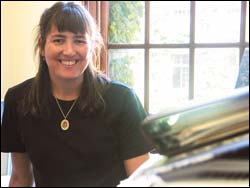 Long haul: Ã‰va PlagÃ¡nyi's PhD marries her interests in mathematics and marine biology in a thesis that "walks the bridge" from single- to multi-species fisheries management.

On Thursday last week, a local news programme ran a story on the demise of Marine and Coastal Management's Operation Neptune. For months their staff had policed the southern Cape coastline, keeping at bay the syndicates and gangs who pillage the country's treasured abalone resource (Haliotis midae). With this guard down, there are fears that the resource will simply collapse, like so many around the globe.

It's against this backdrop that Ã‰va PlagÃ¡nyi has completed her PhD study, a thesis that "walks the bridge" from single- to multi-species approaches in southern African fisheries management.

Her work focuses on developing a mathematical model of the abalone resource. She also assesses the possibilities of extending the single-species model to include multi-species effects and evaluates the potential of a range of multi-species approaches that could contribute to practical management advice on marine resources.

Fisheries management worldwide is in a state of flux, she says, nowhere more noticeably than along the southern coast of South Africa, home to the commercially valuable abalone resource occurs. The main recruitment area for abalone lies along the southern Cape coastline, a long stretch between Cape Hangklip and Quoin Point, west of Cape Agulhas.

Like other marine resources, the abalone fishery needs informed advice on sustainable quotas. PlagÃ¡nyi has constructed a stock assessment model that integrates all the data and synthesises knowledge of the resource in a structured way, assessing its status and productivity and thereby providing the basis for management advice on catch levels.

Although her thesis deals with more than the management of just the abalone, her spotlight on this resource comes at a pivotal juncture in the conservation effort. The South African abalone, considered particularly tasty, is an example of a valuable resource that has declined due to a complex mix of factors; not least of which are social, political and environmental.

Her model has had to account for two particularly complex variables. The first involves the need to estimate the reduction in juvenile abalone survival due to an ecosystem change effect linked to rock lobsters. The second concerns poaching.

"When you create a fisheries model, you need to account for the total catch, including commercial and recreational catch. But no-one knows how much abalone poachers take."

To arrive at an informed estimate of the poaching take, PlagÃ¡nyi has gone a novel route. Her model estimates the illegal take using a novel fisheries index - the confiscations per unit of policing effort (CPUPE), information gleaned from the South African Police.

As a consequence of the recent explosion of poaching activities, the model-predicted 2003 poaching estimate from the southern coast is a whopping 933 tons, more than seven times the legal 2003 commercial total allowable catch for this region.

"This corresponds to the assumption that, on average, only a third of all poached abalone are confiscated," she explains. Poaching is thus a huge stumbling block. It takes seven years for abalone to mature to a size suitable for harvesting. Poachers take everything, including sub-legal size animals that have not been afforded a chance to reproduce.

"If we could cut poaching by just half, we could still have a viable sustainable take from the eastern half of the fishery."

Her model is complicated still further. Rock lobster (Jasus lalandii) have begun to invade the western part of the abalone's range, reducing the sea urchins (Parechinus angulosus) that are so vital in sheltering juvenile abalone, both from the rock lobsters and other predators.

"Although the migration seems part of a natural environmental cycle, no one's quite sure why this has happened." (A research project going begging). The net result? No recruitment in these zones.

Even if you managed to remove the rock lobster, there's no guarantee the abalone would recolonise the zones again and any recovery would take a long time, she adds.

In October last year Marine and Coastal Management (MCM) introduced a new management strategy for this resource. Basically, it's a "Turf" system, where communities get territorial rights to a resource, and hence is a cooperative management structure where communities help safeguard marine resources. It represents a radical shift in the way South Africa manages its abalone resource.

"It has worked well in Chile where communities have sole access to local shellfish resources," PlagÃ¡nyi says. "But it remains to be seen whether or not this change will reduce illegal harvesting sufficiently."

What happens to the information and estimates that her model yields? PlagÃ¡nyi's analysis of the status of the resource forms the basis of management advice provided to MCM.

"We use the model to come up with a range of management options for the catch. MCM advises the environment minister who chooses one of the options and it's taken from there."

Though it will require a massive, dedicated effort to curb abalone poaching, it's not advisable to cry wolf, PlagÃ¡nyi suggests.

"Announcements of an imminent closure of a fishery can lead to a rush to take as much as possible before closure. Although the western section is in a very bad state due to both poaching and the lobster encroachment, there is still a viable fishery worth saving in the eastern section."

It's taken six years for PlagÃ¡nyi to net her PhD - almost as long as it takes an abalone to mature. In that time the mathematics and applied mathematics graduand has given birth to two children, taken a year off to spend quality time with them (in the middle of her PhD), lectured and tutored, co-authored a guide book and contributed to another.

"It's a physical weight off my shoulders," she says, visibly lightened.

Her advice to other young women in academia is: take heart.

"Keep your career ticking over. There will be periods of increased productivity and times when you can't go full steam."