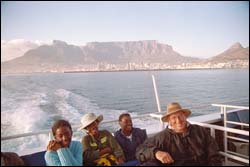 To the lighthouse: En route to the Robben Island lime quarry are geology honours students (from left) Albertina Nakashole, Ndawedapo Mbangula and Phumzile Mkhize, with one of their supervisors, Dr John Rogers.

Three UCT students have carved a milestone out of Robben Island, conducting the first honours fieldwork project on the island's geology, including the infamous lime quarry where prisoners like Nelson Mandela laboured, breaking rocks, some for 10 hours a day, in the combined glare of calcrete and sun.

Given its notorious 300-year history as a penal colony, Cape Town's most famous neighbour is also home to some excellent geological exposures, both around the coast and in the several quarries that were worked in the past, tapping the island's ancient geological inheritance.

Assisted by Estelle Esterhuysen from the Robben Island Museum, the geological sciences students Ndawedapo Mbangula, Phumzile Mkhize and Albertina Nakashole, along with their supervisors Dr John Rogers and Professor Hartwig Frimmel, found themselves among the jostle of tourists at the harbour each day.

For the women (there are seven of them to five men in the honours class, a neat inversion of the gender status of previous years), this was the least memorable aspect of the field work. They enviously watched the tourist vessel zip across the water while theirs (reserved for school visits, etc) ploughed through the sea with little speed and grace.

Frimmel's student, Moscow-born Mbangula from Namibia, studied the geochemistry and mineralogy of the bedrock on the west coast north of Langbaai, a late Precambrian Malmesbury's Tygerberg formation (a mere 560 million years old). On Robben Island, she had a feast: 40 different beds of rock within walking distance.

Working on Robben Island, Mbangula had the opportunity to reflect on the lesser humanitarian aspects of its history and echoed the thoughts of her peers: "I felt privileged to work in a place where someone like Mandela had been."

For Nakashole, who came to UCT with a BSc from the University of Namibia, it was also a chance to remember compatriot and former political detainee Andimba Toivo ya Toivo, the Namibian minister of prisons and correctional services, who worked alongside other inmates in the limestone quarry.

"The glare [in the quarry] was terrible and we wore sunglasses all the time. The whole place shone white," Mkhize said.

Nakashole's mission was to study the bedrock's sedimentary structures, for example laminae and the completely preserved ripples in the rock along the shores. Geologists, it seems, are fascinated by these patterned friezes.

"They point to the depositional environment of the Tygerberg Formation, which appears to have been formed in the ancient Adamastor Ocean (560 million years old)," Rogers expands. This is much older than the present South Atlantic Ocean that washes the island, which at 130 million years old is a mere pup in oceanic terms.

Interestingly, Nakashole was able to compare the island's sedimentary structures to identical ones found thousands of kilometres north of Cape Town in the younger Bude Formation in northern Cornwall, the subject of several British PhDs.

Mkhize examined the Late Quaternary (less than a million years old) beaches and dunes on the island, comparing these to those studied at Langebaan and Saldanha and in southern Namibia and south Wales.

"Both southern Namibia and the west coast of Robben Island are exposed to powerful swells from the south-west, originating in the Southern Ocean in the Roaring Forties, the Furious Fifties and the Screaming Sixties," Rogers explained.

And life was a beach - for a while at least - for Mkhize. One of her tasks on the less-frequented side of the island was to study the effect of waves in sorting the spheroidal and discoidal boulders on the steep shingle beaches of the island's west and south coasts. She was looking to see whether the form of boulders differed from the low-tide section of the beach to the high-tide part and compared her findings with the modern south Wales study.

"The more exposed beaches are coarser than the more protected ones south of the harbour, itself a barrier to the longshore migration of sand to the north along the wave-sheltered eastern side," Rogers noted.

The summer South Easter also blows sand off the beach to form coastal dunes. The sea has made its mark on the western beaches: the island's oceanographic setting in the cold Benguela Current is reflected in the species of shells found on Shelly Beach on the island's west coast.

Mkhize came to UCT spurred by the geology unit's reputation. She was toying with becoming a pilot or a doctor, solid careers. But she was swayed by company representatives who visited the school. They opened a vista of an unexpectedly enticing field: geology.

"I needed some direction at that stage of my life. The challenge was being a woman. The industry is still very male-dominated."

It was Mkhize who actually got down and dusty in the Pleistocene calcrete deposit in the lime quarry. Calcrete is a lime-rich soil that forms on shelly sand, dune sand in the case of the quarry. Now called Mandela's Quarry, it developed in the fossilised sand dunes of Pleistocene age. Calcareous soil formed above the shell-bearing dune sand that was deposited above the basement metasediments of the Neoproterozoic Malmesbury Group. Geologically speaking, a bit of a mouthful.

The whole suite of projects was helped by earlier field mapping by Dr Hannes Theron and Robbie Hill of the Council for Geoscience (formerly the Geological Survey) and has been published as an official geology map.

The future looks rock solid for the trio of honours graduands. Mkhize has a contract with Anglo Coal. Nakashole plans to do a master's next year and will then return to Namibia to work out the conditions of her scholarship. Mbangula hopes to initiate a programme in Namibia to encourage other young women to study the sciences.

Among them may be more rock stars.