Gold medal for Warner on the eve of retirement 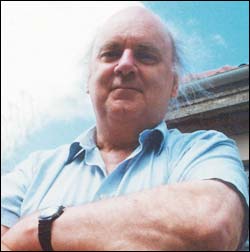 UCT's Distinguished Professor Brian Warner has received a gold medal for science of benefit to the public at the second annual awards ceremony of the Academy of Science of South Africa (ASSAf).

"We're often asked if the country needs more astronomers. The answer is no," he said in an interview with SpaceDaily. "But we do need minds trained in research techniques in the physical sciences because those skills are applicable in industry and in other sciences in general."

According to the article, South Africa is often urged to use science to fight poverty, so awarding a prize for public contributions to an astronomer is rather unusual. "However, it is a plank of the Department of Science and Technology to promote astronomy to take advantage of the country's ideal location in the southern hemisphere - considered to have a better view of the solar system."

The article continues: "With the lack of light pollution and storms, this means that the country has one of the best 'ringside seats' on the planet for gazing deep into the universe - one of the reasons why the government has invested heavily in the cutting-edge South African Large Telescope (SALT), which is on the verge of completion in the tiny town of Sutherland, and is bidding for the rights to host the US$1-billion Square Kilometre Array (SKA) radio telescope complex in the remote expanses of the Northern Cape sheep farms."

Warner, one of three Distinguished Professors at UCT, believes there are many spin-offs from astronomy. "Astronomy has driven the technology and the technology has found other important applications in security and health."

Whenever baggage is put through the x-ray machine at airports much of that equipment is called astrophysics. "That highly-sensitive scanning machine was developed by x-ray experts in astronomy. The infrared scanners used in hospitals to find tumours, which have a higher temperature than the rest of the body. That came out of the technological development demanded by astronomy looking at infrared radiation from distant stars and galaxies."

"In training students in astronomy, I feel that I'm not producing more astronomers. I am training the minds of the new South Africa in research techniques," he told SpaceDaily.

Warner's main research passion is observational astronomy at South Africa's famous telescopes in Sutherland, one of the coldest regions of the country, where he specialises in compact stars, like the mysterious black holes which hoover up everything around them, and white dwarfs, the fiercely hot, tiny and incredibly dense cores of elderly stars.

Warner is also one of the International Astronomical Union's vice-presidents, which is considered a bit of a coup for a developing economy such as South Africa's, the article observes.

"The second annual awards of the Academy of Science of South Africa seem to have come full circle. Warner was one of the nine founding fathers of the post-apartheid academy in 1996, who then excluded themselves from being members so that they couldn't be accused of nepotism."

Warner is due to retire soon. "But it won't make the slightest difference, I become a professor emeritus and move down the corridor to another office to make way for a successor," he told SpaceDaily. "My life is in research and in astronomy and I will hardly notice the difference."