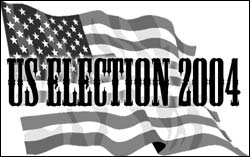 New spaces: Postgraduate students in the Faculty of Humanities now have an online journal of their own.

Many members of the UCT community followed the US presidential election with interest, none more so than deputy registrar Dr Jim McNamara and spouse Marilynn McNamara, from the libraries department, who were both actively involved in helping Americans in South Africa cast their votes.

Jim McNamara is the interim chair of a new chapter of an organisation called Democrats Abroad, an international network of millions of American citizens who live outside the US and are involved in the US Democratic Party. The South African chapter has some 75 members signed up in the Western Cape and a further 50 in Gauteng.

MBA student Angela Hansen was instrumental in getting this chapter off the ground to mobilise support for the Kerry camp. As she is returning home, McNamara is taking over the helm.

In the run-up to the presidential election, they helped Americans cast absentee votes - regardless of their party political affiliations - by advising them on the varying regulations in the 50 US states and even couriering the federal absentee ballot to people across the country.

While they don't know quite how many people cast their votes, McNamara says the turn-out was certainly higher than in recent elections. Now that the election is over, they will maintain contact with Americans living in South Africa by organising events to keep them in touch with political developments back home. McNamara said some election analysts were going to be visiting, as well as US congressional delegations.

As for George W. Bush's recent victory, McNamara echoes the frustration experienced by Democrats in the US. "If anything many, many Americans voted their fears. Those fears are real and their perception was the less change the better."

He also puts Bush's win down to the way in which the Republicans managed to mobilise religious organisations around the message that he better embodied traditional American and Christian religious values. "It was expected but I think the scope and the scale of it was surprising, and a significant factor," comments McNamara.

In addition, the youth, who were deemed to be leaning towards Kerry, might have enjoyed the music provided by new converts to political campaigning - like Bruce Springsteen - but they voted in roughly the same proportions as they did four years ago.

McNamara anticipates that the big issue on the domestic front under a Bush government is going to be what he terms the "payback" expected by the Christian right for their mobilisation efforts. On the international front, the worrying spectre of Iran and North Korea's nuclear capabilities loom.

"Is another pre-emptive war possible?" he asks. "We will have to see. This is one of the reasons why people were so mobilised around this election. There was a consensus that George Bush made the world a more dangerous place and not a safer one. That is why we thought it was time for change."