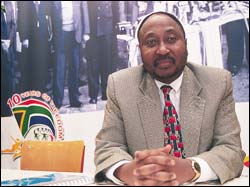 Deputy vice-chancellor Professor Thandabantu Nhlapo has been appointed to chair a national commission to investigate disputes and claims into the country's traditional leadership.

The commission, styled the Commission on Traditional Leadership Disputes and Claims, has been appointed in terms of legislation enacted in 2003.

Nhlapo is aware that the next five years, the life of the commission, are going to be interesting times indeed.

While chairing the commission part-time, he will continue his work at UCT as DVC tasked with student affairs and external relations. This will necessitate the commission working over vacation periods and public holidays in order to execute its brief without interfering with his job at UCT.

This brief, in short, is to hear and adjudicate on traditional leadership disputes dating back to September 1, 1927, the commencement of the Native Administration Act, later called the Black Administration Act, parts of which are still on the statute books.

Given the history, the task is likely to be fraught with difficulty. Nevertheless, Nhlapo relishes the prospect of contributing to the solution of one of the most intractable problems in customary law. And he concedes that for those affected by it, it could well turn out to be as painful as pulling teeth, removing authority from some and conferring it on others who are found to have legitimate claims.

He explains: "The 1927 Act was a British colonial piece of legislation which purported to be a general indigenous law charter, or 'native' charter, if you like. In it, the Governor-General was styled the Supreme Chief of Natives with the power to install and demote or remove tribal leaders.

"He had the power to take a tribe and split it into many parts, and set leaders over the fragmented units, or take many parts and constitute them into a tribe. If you consider it that way, then it becomes clear why the date of that statute is the cut-off point for the work of the commission, as this is the clearest marker of the beginning of formal colonial interference in customary law."

Nhlapo recalls the debate around customary law during the drafting of the constitution: "After 1994, you either said this traditional stuff was an anachronism in a modern state, and there were people who said that, or you said the new South Africa was not meant to be a rootless tree going forward without ever once looking back. It was a big debate; I was very much part of it."

Ultimately, a decision was taken that "customary law should remain as a valued, vibrant, equal part of the South African legal system, equal to the imported law, but that all efforts should be taken to move it into the 21st century in respect of imperatives of modern, democratic governance and human rights norms".

Thus, if indigenous structures and value systems were to be maintained, steps would have to be taken to ensure that those structures and systems were legitimate. Interestingly, notes Nhlapo, it was the traditional leaders themselves who asked for an audit of their sector in the hopes of restoring legitimacy to those among them who were not tainted.

Nhlapo anticipates that many of the disputes over traditional leadership will have arisen post-1948, when the National Party took control of government. One tactic of the erstwhile government was to remove traditional leaders who resisted apartheid, especially the grand Bantustan plan, while anointing others who were willing to toe the apartheid line. At this stage, there is no clear indication of the number of potential petitioners, but Nhlapo anticipates it might run into the hundreds and also impact on other areas such as land claims.

"The principal of transparency is going to be very much part of the work of the commission. We are going to have to be sure when we make a ruling that every subject of a traditional leader, winning or losing his claim, knows the reason why. It will have to be a very open process."

All other members of the 12-person commission are also employed elsewhere. They include academics, advocates and public servants. The commission will be assisted by researchers, ethnologists, two additional advocates (in anticipation of legal petitions) and officials from the departments of provincial and local government, justice and land affairs.

Legal challenges are expected, because unlike many commissions, this one does not make any recommendations to the president: it's determination in a dispute is final and binding. The only recourse is to a court of law. In this way, it hopes to ensure the independence of the commission and its decision-making from executive interference.