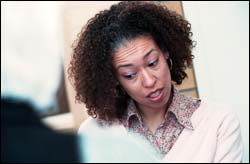 Opening minds: Researcher Nancy McFarland hopes to draw more attention to the plight of those who suffer from dementia.

After turns in Turkey and Australia, itchy-footed Nancy McFarland has set up camp in South Africa and UCT's one-of-a-kind Albertina and Walter Sisulu Institute of Ageing in Africa (just recently so baptised). Here she hopes to shed some light on the impact of dementia on the country's aged and their families.

For as long as she can recall, McFarland has been drawn to older folk.

That could very well be, says the 34-year old, because she is something of a late arrival, born when her mother was well into her forties. Naturally, the family friends who would hang around the McFarland's South Carolina home in the United States were, at best, getting on a bit. No surprise then that these hoary acquaintances - as well as a "vivacious" 92-year old she would meet later - were the ones McFarland remembered most fondly from her wonder years.

"I was just always around older people," she recalls.

At home she may have been surrounded by older people, but that was not always the case at work. In fact, it seemed at first unlikely that McFarland's career path would cross with anyone not out of puberty. After finishing her undergraduate studies at the Florida State University, she drifted into teaching, working with troubled youth at the Pinellas Technical Education Centre.

It was a few years later that McFarland, an inveterate volunteer, started working at organisations dedicated to the care of the elderly, a task she took to like a duck to water.

"It came so naturally," she says.

When in 1999 she moved to Turkey, where she taught research writing at the Istanbul Technical University, she again dedicated her free time to the aged, signing up for volunteer work at a facility dedicated to geriatric medicine.

In-between work and taking up fencing in Turkey, McFarland also started on a master's degree in gerontology through the University of Southern California. She called a halt to those studies, however, on the advice of a lecturer who had picked up on a broader interest and suggested that she consider a programme in public health.

Scouting for a course with a cosmopolitan flavour - she really wasn't keen on one with a narrow American focus, she says - McFarland settled on the master's degree in international public health at the University of Sydney.

Last year, as she was wrapping up her degree and two-year stay in Australia, she began to look out for a new challenge in the field. South Africa beckoned.

And what a challenge the country offered. Working from UCT's Albertina and Walter Sisulu Institute of Ageing in Africa, which she joined early in 2004, McFarland is applying her mind to the study of dementia. The illness, said to afflict some 18 million people worldwide, most in the developing countries, primarily hits those over 65. It is usually associated with the loss of memory, confusion, and problems with speech and understanding, among other symptoms. Alzheimer's illness and vascular dementia are the most common forms of the condition, for which there is no cure.

"It's not a normal part of ageing," McFarland points out.

McFarland's study is not going to be a cakewalk. There is, she learned, a critical lack of information about the illness in the country. For example, South Africa has no existing epidemiology on dementia, so there are few facts and figures available on its incidence and population patterns. Existing (Western) diagnostic tools are not ideal for local conditions, where language differences, illiteracy and innumeracy have to be taken into account. There are few resources for the management of the condition, especially among the poor. And knowledge of the disease is very limited. "People don't know what it is," she says.

This dearth means the illness has not received the attention and resources it deserves from those in power.

McFarland hopes to shed some light on the topic over the next couple of years. She wants to draw attention to the costs - such as medication, visits to the doctor, the loss of income and stress - that families incur when they have to take care of someone suffering from the disease, and how that is related to equity in the country (who can access care and support - if it's available - and who can't).

In South Africa, as with most other countries, the caregiving responsibility is normally shouldered by the children, more often than not the daughters, says McFarland. Most have to balance work and support of sufferers, who need various levels of monitoring and care, depending on the stage of the illness.

"It's a very difficult way of living. The caregivers are often exposed to a great deal of strain."

Over her first few months in South Africa, McFarland has been spending plenty of time with Alzheimer's South Africa support groups, speaking to patients and family members. She's even found an organisational model she believes everyone should emulate - the "amazing" GH Starck Centre & Rehoboth Age Exchange in Hanover Park on the Cape Flats. Funded by City Mission, an international relief and development organisation, the centre provides residential care for some 130 elderly people, but also looks after those dropped off for the day by working caregivers from the immediate and surrounding areas. These caregivers, when they need a deserved longer break, can also leave their aged parents in the very capable hands of the facility's new Respite Centre for a few days.

There's a long slog ahead for McFarland, but she has some goals in mind. "I really hope that I can help explain and describe what the reality is for people who suffer from dementia and for their caregivers, to describe what happens to a family where someone has dementia." Once that reality has been put into word and report, perhaps then the illness will draw more attention.

And maybe then both sufferers and those who take care of them will be better taken care of.