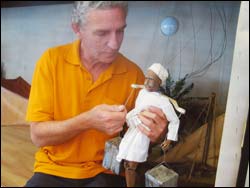 A mechanical puppet show commissioned by the Kuwait Science Centre to educate the country's youth on water conservation is almost ready to be crated and transported to the Persian Gulf, thanks to a team that includes UCT electrical engineering lecturer Sam Ginsberg.

For one of his more creative and unusual assignments, Ginsberg says the team has exploited computer-based animation technology to produce a fluid, sophisticated mechanical puppet display, the voice-overs carefully synchronised to lip movement, with movable scenes and props.

The Kuwait Science Centre includes an Imax theatre and an aquarium, the biggest in the Middle East. As befits a desert country, the focus is on water and its preservation. The puppet show will be housed in the science centre's aquarium, a popular attraction for visitors and children.

Sandwiched between Iraq and Saudi Arabia, the tiny, oil-flush country is battling desertification and has very limited natural fresh water resources, relying on over 50 desalination plants to provide for their needs. Water wastage is high on the country's list of environmental issues.

Ginsberg was involved in designing and building the mechanical puppet display at the local Two Oceans Aquarium, which is also used to educate children on water conservation.

For the past five months the team has been holed up in an electrical workshop near Ndebeni. Ginsberg has been working with handyman Aidan Hart ("He can make anything work"), and model-maker and robotics and animatronics fundi Duncan Temple-Forbes to bring this water story to life.

In the past dhows brought water to Kuwait, to be sold by kanderi, usually Asians, who used to carry water from the boats to sell in the towns. And this is where the script for the three-act puppet show starts.

The other two puppets are a Kuwaiti boy, Hamad, and a savvy camel who has the answers to most of Hamad's questions. The scene shifts to an industrial landscape and here Temple-Forbes recreated the three distinctive Kuwait Towers that dominate the city's skyline, the middle tower storing about one million gallons of water. Even this feature becomes animated, explaining to the puppet Hamad how salt is removed from sea water and chemicals added to kill bacteria, and how the water is then stored underground and in water towers.

The desert scene turns to a modern, cityscape, complete with an unfurling faÃ§ade of the science centre, all built on the availability of water.

"If you waste it, all this is threatened," the camel says sagely and the cityscape disappears to be replaced by dunes representing stagnation and desertification. It's a complex sequence that requires intricate mechanical manoeuvring.

Temple-Forbes has some experience in getting illusion to resemble reality; he created all the fibreglass rocks for the Two Oceans Aquarium. When the idea of a puppet show to educate children on water conservation was first mooted, he approached UCT's engineering unit for assistance.

The puppets and sequences rely on a system built on servos motors of the kind used in radio-controlled aircraft to position control surfaces like the elevators and rudders. The small devices are also widely used in robots.

Ginsberg had "done some computer interfacing" and rigged up a standard industrial computer, a modernised version of the old 486.

All pertinent information is displayed visually on the computer and can be adjusted by the user.

"The process is similar to movie or video editing," Ginsberg explains. Animation programming made easy.

With VSA it's easy to see and adjust what is going on at each point in the programme, which servos are moving, where they are moving, how fast and when the switchovers should kick in. VSA is great for animatronics, as a wave on MP3 files, digitally compressed audio data, can be displayed graphically, making lip synchronisation and other sound-dependent actions easier.

The programme architect in the States "almost fell on his back" when he heard what the team had accomplished.

"He had used it to produce only very basic robotic movement," Ginsberg commented.

The challenge for Ginsberg was to figure out how to control all 62 devices in the show, a constant juggle to control the pieces and make them work together. The sound and video tracks are run on a DVD player, modified to interface with the computer.

Down in the workshop, Ginsberg, Temple-Forbes and Hart are tweaking the sets and adjusting the mop heads of wires.

The show is almost ready to go; the last hurdle concerns the Arabic translations for the soundtrack.