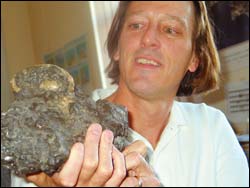 Geological mystery: Assoc Prof John Compton with a rock of phosphorite conglomerate dredged by a trawler 30 km off Hout Bay, which includes in its mix what is thought to be a fossilised whale's eardrum.

If rocks and mountains tell us stories of our geological past then geology is poetic science - "An incomplete record, a story made from fragments," as geological scientist Associate Professor John Compton puts it.

Compton has just published The Rocks and Mountains of Cape Town, a work that popularises his academic pursuits, not something many academics are easily able to do.

California born and raised and educated at Harvard University where he received his PhD in earth sciences, Compton taught marine geology at the University of South Florida for 10 years before he joined UCT in 1996.

It was a tumultuous time in South Africa. "But we were up for an adventure," he said. "Cape Town reminds me of the California of my childhood. It's nice to see so much un-development."

Geology represents something of a departure for him. He had intended studying chemistry, computers and maths, but he needed something more "real" and geochemistry offered the physical ingredients. "You can hit rocks with a hammer," he says wryly of his need to study something he could get to grips with.

Acquaintances often approach him with questions about rock exposures they have seen on hikes. "I've come to realise that many people besides the students I teach at university are interested in the rocks and mountains they see every day; on their way to work or on weekend outdoor excursions. It is for these people that this book has been written."

With over 80 illustrations, the work is a departure from the refereed offerings in more academic publications (he has published over 40 papers in scientific journals on various aspects of geology). He wrote it during a six-month sabbatical earlier this year, taking time out from ERT (a first-year introduction to the environmental and earth sciences), which he has convened for seven of the eight years he has been in South Africa.

The book's interdisciplinary approach involves geology, archaeology and environmental sciences. Compton has also integrated the story of the relationship of the landscape, plants and people to the rocks. It thus links with existing guide books of the Cape's natural heritage.

"This book provides a layperson, the average Capetonian, with an in-depth guide to an understanding of earth system science from a Cape Town perspective," Compton expands. It includes familiar places and local landmarks: Disa River in Hout Bay, the Cecilia Plantation, Kogelberg Reserve and Rondebosch Common, as well as further flung geological features: Darling Hills, Sir Lowry's Pass, and the rocks and mountains of Malmesbury and Tulbagh.

These geological features do indeed tell stories of the "deep" geological history of the area; hard evidence of ancient continental collisions and the effects of the African superswell. The book's scope sweeps from the small scale; geological quirks like the black- (manganese) and orange-stained (iron) sandstone rocks you find above Hout Bay, to the large-scale; features Mark Shuttleworth may have seen from space, like the Cape Fold Belt.

While Table Mountain and the Hottentot Hollands Mountains may look isolated, from space you can also see that they are part of a larger mountain range, one that extends 700 km from Port Elizabeth running parallel to the coast, before it takes a sharp 90 degree turn to continue north of Cape Town as the Cedarberg.

Natural phenomena are explained and put in geological contexts. But earth scientists, Compton writes, are still scratching their heads over other persisting mysteries; for example, why southern Africa is so high, particularly the Karoo Plateau behind the steep Cape Fold Belt.

"One possible explanation is that deep below the surface of Africa a large plume of hot mantle rock - the African Superswell - is still ascending. This plume is thought to have buoyed Africa up to make it the continent with the highest mean elevation."

It took some work to take what he has lectured and make it accessible. The book has been written to suit a high school to first-year university level. And when technical explanations are required, for example, to describe the theory of plate tectonics (movement of the earth's plates), these are boxed off so they can be read or skipped over.

And if you thought "scum of the earth" was a vulgarity reserved for Blue Bulls supporters or those with antisocial proclivities, in fact the term has a geological meaning. In the creation of the Earth's crust, the continental crust is apparently too light to be returned to the Earth's mantle. It remains at the surface as the "scum of the earth", sometimes colliding and joining to make supercontinents, or splitting into the separate continents outlined in our atlases and maps today.

(The Rocks and Mountains of Cape Town is published by Double Storey, a Juta company, and will be launched on Thursday October 28 in Leslie Social Sciences LT2B at 18h00, free and open to the public). 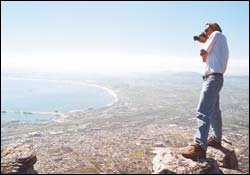 Hard rock: The author Assoc Prof John Compton captures the view from the top of one of the most famous sandstone features in the world: Table Mountain. Table Mountain is part of an ancient landscape and runs dramatically above the Cape Flats because tectonic forces, both ancient and recent, have pushed it up. It was once probably part of the Cape Fold Belt, part of a trough in an undulating and folded rock deposit, the higher crests of the folds having been eroded away around it.