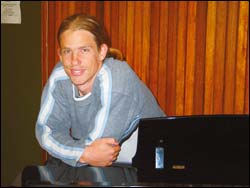 Keyed up: "...in this country you get to create your own opportunities." - Theo Alkema, final-year BMus student and winner of the Lionel Bowman Prize for Beethoven Playing.

As a high school pupil in Bloemfontein Theo Alkema and a friend camped in the veld near Koffiefontein for a week, living off the fat of the land - though lean might be a better word to describe the sparseness they found.

"We were filthy, living in the open," he grins. But out there, he found "what makes him tick". In his case it was a well-timed discovery. He was juggling three study options: engineering, music or psychology. The Free State-born Alkema was also an all-rounder on the cricket pitch. But music was what he grew up with.

"It's part of my blood," he said of his final choice to study piano at the South African College of Music.

His mother, Anne-Marie Alkema, teaches music at Sentraal HoÃ«rskool in Bloemfontein. With the piano in striking distance, the young Alkema began exploring the keyboard at four. He also tried the saxophone and cello ("But I hated unpacking it, putting resin on the bow and tuning it - the piano was just there!")

His decision to concentrate on the piano has been vindicated. In August, Alkema won the annual Lionel Bowman Prize for Beethoven Playing at the Baxter Concert Hall.

He is a reminder of just how diverse the UCT student population is. He's an Afrikaner and jokes that his English is being polished. Occasionally, he taps his head for the right English phrase. And like his father, conductor Sjoerd Alkema, he chose UCT to further his music studies.

Alkema is amused that many of his father's lecturers are now his teachers and tutors; music school stalwarts like Michael Tuffin, James May and Peter Klatzow who have engendered a sense of continuity through the years.

Even his favourite composer proclaims his South Africanness. Though he enjoys the romantic Russian and French composers, it's the music of pianist Arnold "Nols" van Wyk that draws him - as much as the arid spaces around Calvinia in the Hantam Karoo where the composer was born.

"The landscape captured his dark and intense music," Alkema says of Van Wyk. "It's not wonderfully audience-friendly stuff. It's more intellectual, mood music, music you listen to deep in the night."

He hopes to record all Van Wyk's music over the next two years.

With exams around the corner, the final-year music student is now weighing up other options. Will it be a master's at UCT or Stellenbosch next year? Perhaps a teaching post at a music and Bible school, Joyful Noise. Or even an agency for a family business selling a new environmentally-friendly agricultural product.

"I need to earn some money and get off my father's payroll," he adds.

He's not overly keen to pack a rucksack and head for greener pastures overseas. "South African music is very exciting," he says. "And in this country you get to create your own opportunities. As the slogan goes: 'South Africa is alive with opportunity'."

Alkema will take life as it comes, grabbing the fortune that comes his way. "I want to develop my talent as far as possible. We were created for a purpose and if you believe that, you will live that purpose."

His faith fosters a keen interest in people. He believes in building others mentally and spiritually. "I care a lot about people and their wellbeing -and there's so much that needs to be done in South Africa and Africa."

And though he still manages to get onto the cricket pitch (he plays UCT 2nd and 3rd teams), the young pianist also makes time to read, his great indulgence. On the bedside table are leg spinner Shane Keith Warne's autobiography and a book on Luciano Pavarotti.