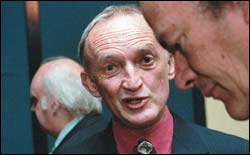 The large group of nine new UCT Fellows announced recently reflects the excellence of the university's academic enterprise and swells the ranks of those elected to fellowships to 58. Many of the fellows gathered for the traditional welcome at the Annual Fellows Dinner at the Breakwater Lodge campus.

The prestigious fellowships are among the university's top honours for academics, recognising original and distinguished academic work. It is a tribute to the calibre of UCT's academic staff that the Fellowships Committee was able to select as many as nine new candidates.

Though several of the new Fellows were away at the time of the announcement, Monday Paper caught up with six of the new candidates. This is what they shared.

Professor Jennifer Thomson (molecular and cell biology): "As co-founder of SA WISE (South African Women in Science and Technology) and long-time chair, it is particularly heartening to be among three new women fellows. This will also be a great boost for my personal career. It has come very timeously, just as I am writing a report to the Rockefeller Foundation on the past three years' funding and requesting funds for the next three! It is also a positive reflection on the research groups I share with Professsors Jill Farrant and Ed Rybicki and Associate Professor Sagadevan Mundree."

Professor Anusuya Chinsamy-Turan (zoology): "I am deeply honoured by this recognition as a UCT Fellow. It feels good to be acknowledged by my colleagues and peers for my contribution to science. Very few women are recognised as UCT Fellows, but understandably this is a consequence of our particular history. However, given the increasing numbers of women in science, and particularly of women at higher academic ranks, it is predictable that this would change in the near future." 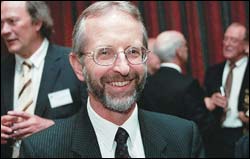 Professor Hugh Corder (dean of the law faculty): "Respect from one's peers is one of the yardsticks by which academic achievement is measured, and within UCT the award of a fellowship is one of the most significant ways in which this is expressed. While a student, I seldom imagined myself making a career in academic life, so my election as a fellow comes as a wonderful surprise. It would not have been possible without the support of inspiring teachers, colleagues, friends and family. I am particularly delighted that someone from the law faculty has been recognised this year, which started with the untimely death of one of only two 'serving' fellows from the faculty, Michael Blackman. This award serves as an encouragement to the research work done in the faculty, much of which has had a real impact over the past 10 years on the policies and laws which govern, and thus impact on our daily lives. I deeply appreciate and am humbled by this honour."

Professor Anton le Roex (geological sciences): "To become a UCT Fellow is an unexpected honour, and I am most grateful for receiving the nomination. My research interests have revolved around trying to better understand aspects of the Earth's evolution through the application of geochemistry to unravelling the processes involved in the generation and evolution of magma at depth within the Earth's mantle. Such magma rises to the Earth's surface and by careful analysis of its composition provides a window into the compositional evolution of the deep Earth interior that is otherwise inaccessible. In this regard I have been fortunate enough to have been able to conduct my research from a central geographic position within the former supercontinent of Gondwana, and have had as a natural geodynamic laboratory access to the near present-day volcanism occurring on the sea-floor surrounding southern Africa, and to exposures of more ancient volcanic activity located on the African continent itself. This has allowed me to combine the enjoyment of visiting and seeing the natural beauty of exotic locations not visited by many, with the excitement of acquiring and interpreting geochemical data and developing quantitative models which attempt to describe and understand some of the processes that have shaped our planet; from as deep as the core-mantle boundary to the Earth's surface. To be recognised in this way for something that is such fun to do, is truly gratifying."

The zoology department at UCT has been Associate Professor Charles Griffiths' working home since he was first employed here as a research assistant over 30 years ago, at the tender age of 22. Over that time his research interests have ranged widely, across numerous animal groups and through marine, freshwater and terrestrial habitats. "I have, however, always concentrated on trying to document the extraordinary diversity of life that surrounds us here in South Africa," he added. "The achievements that have given me most pleasure are thus to have described 100 species new to science and to have been able to capture the interest of the public through a series of field guides to the regional fauna." Having broad research interests has not always served him well, however, especially with funders such as the NRF, who tend to favour "specialist scientists", he added. "I am thus most grateful that the UCT Fellowship Committee has recognised the broader contribution made by my work to date. I also hope this adds to awareness of the extraordinary wealth of life that surrounds us here, and the effort still needed to simply name and describe our national fauna, of which more than half the species still remains undescribed."

Professor Mino Caira (chemistry): "This award is a most gratifying recognition of scholarship in a niche of supramolecular chemistry that focuses on drug beneficiation. Our research programme is aimed at producing and characterising novel solid forms of therapeutic agents suitable for pharmaceutical development. Apart from the commercial interest in these new candidates, their study generates significant academic spin-offs, including deeper insights into the crystallisation process, the nature of non-covalent molecular interactions and structural relationships in crystals.

While the award is a personal one, I share the honour with my co-workers, colleagues and postgraduate students in the Supramolecular Chemistry Research Unit, as well as research collaborators abroad, whose continued support and seminal contributions to the programme deserve equal recognition."