Apartheid-era spying: a glimpse into UCT's past 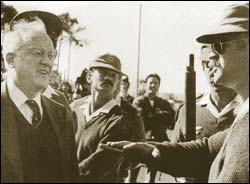 As the vice-chancellor Professor Njabulo Ndebele has said at numerous celebratory functions this year, the commemoration of UCT's 175th anniversary provides an opportunity to reflect on the university's past. Historical studies' Professor Christopher Saunders reflects on one aspect of that past: apartheid spying.

When the history of UCT in the apartheid era is written, it will not only be based on the university's own records and the memories of those who were at the university at the time. It will also draw on other sources.

One aspect of that history that some future historian will explore is the political involvement of its staff. How much active opposition to apartheid took place? What forms did it take? Among the sources of evidence for this are what members of staff wrote and information on what they taught and how they taught it.

Other evidence, which requires particularly careful handling, comes from the state. We now know that some of the files on individuals kept by the Security Police and the Department of Justice survive, and it is possible for individuals to apply to access their files. Robin Hallett, who taught in the history department in the 1970s, was delighted to be told that his name appeared on the list of those on whom the Special Branch had kept files, and the names of other members of staff appear in the list of Enemies of the Apartheid State that was published in This Day some months ago. We can only speculate on what information their files contain.

Other information from state records come to light by chance. I recently obtained, under the Promotion of Access to Information Act, a set of documents from the archives of Military Intelligence relating to my research interest, South African involvement in Namibia and Angola.

Among them was one that seems to have got into the wrong folder. It shows that UCT was a prime target for state attention, not only by the Security Police, but also by Military Intelligence.

Compiled by the director of Military Intelligence and dated December 10, 1980, it is headed GEHEIM (secret) and is titled General ANC/CP Methods of Recruitment of Agents from the RSA.

A large portion of it is devoted to "level of student consciousness and involvement in relation to UCT staff and postgraduates". The reason for the state's concern with UCT is given as follows: "The level of leftist consciousness and opinion at UCT is certainly the highest in RSA and this situation has persisted, from 1970 to 1980, through the even darkest periods of leftist student politics. During the demise of NUSAS in 1975/76 due to the Breytenbach arrests [a reference to the arrests of those whom Breyten Breytenbach met on his undercover visit to South Africa, described in his memoir Season in Paradise], the UCT campus was the only one that weathered the storm and showed resistance and vitality in the face of serious setbacks".

The document proceeds to list departments with "a leftist orientation" and to give the names of the "leftists" in each department. In terms of existing procedures, such a document has to be declassified, which means that before it was released to me an official went through each page and blacked out any word or passage that they thought I should not read. Though many of the names of these "leftists" are masked, however, it is often possible to tell who was being referred to.

One institute at UCT is singled out. The Southern African Labour and Development Research Unit is called "the most influential 'non-aligned' institution in the RSA". "The entire staff and postgraduate research community has a leftist oprientaiton". Its head is called "an intelligent, sophisticated, well-informed, powerful and shrewd operator". To "crack" him, it was said to be necessary to do various things, including "careful observation of his activities on Sundays and holidays; establishment of his contacts whilst visiting overseas – [and] the uncovering of any communication system he may have established with the enemy – "

The document concludes that "There exists a climate on UCT [sic] which is perfect for the conscientizatian and practical training of developing leftists [sic]". It recommends "that the operational activities of this Service be stepped up on the UCT campus, as leftist activities on this campus have reached uncontrollable proportions". Reports of this kind sometimes had terrible consequences. Not long ago a room on this campus was named after Jenny Curtis Schoon, who was assassinated in Angola by a letter-bomb sent by the South African Police.

We do not yet know what precise "stepped up" activities followed this particular report, but state surveillance was at its most intense in the middle and late 1980s (for some details see the memoir by former vice-chancellor, Dr Stuart Saunders, Vice-Chancellor on a Tightrope.)

Many may now regret that more was not done to fight apartheid, but there is no doubt that elements in the state took anti-apartheid activities at UCT very seriously indeed.