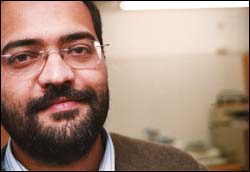 Making waves: A study by Dr Haroon Bhorat shows that African university graduates are finding it hard to land jobs.

A study by a UCT scholar may catch some by surprise. It shows that the South African economy has not, as many suspect, been losing jobs overall. But it can't meet the growing demand for work either. The study also revealed that, among tertiary-qualified individuals, African graduates are the worst off when it comes to finding employment.

Dr Haroon Bhorat is putting paid to a couple of popular beliefs around unemployment in South Africa.

In the lead-up to the tenth anniversary of democracy in South Africa, Bhorat, director of the Development Policy Research Unit (DPRU) in the School of Economics, was one of many UCT scholars commissioned by the President's Office to take a closer look at certain key aspects of the economy. Bhorat's study, which appeared in the book Changing Class - Education and Social Change in Post-Apartheid South, published by the Human Sciences Research Council recently, turned its attentions to the labour market. In particular, Bhorat concentrated on the notion of "jobless growth", an idea that had been growing in popularity.

"The view was fairly widespread that the economy, post-1994, had been bleeding jobs," says Bhorat. "That even though the economy had been growing - even if it wasn't very fast - we had seen an absolute decline in the number of jobs created." Bhorat turned to data from the household and labour-market surveys, together covering the period 1994 to 2002, conducted by Statistics South Africa.

His number-crunching revealed a couple of interesting things. For one, the economy had, "in the aggregate", been creating jobs over the period. As many as 1.6 million, in fact. This notwithstanding the large job losses in areas such as the mining and clothing industries.

Bhorat's findings may well have debunked any notions of jobless growth, but sadly it doesn't tell the whole story either.

"The problem of course is that over the same period the labour force had grown by some five million."

That's a 37% spurt in people looking for work, compared to a 17% increase in actual jobs. Which means, says Bhorat, that for every 100 people looking, only 32 actually find work of some kind.

In trawling the numbers, Bhorat happened across another noteworthy find, this time to do with university graduates. Although unemployed tertiary graduates were just a drop in the unemployment ocean in South Africa and their numbers were the lowest among the country's educational sector - less than that of school-leavers, for example - there had been some alarming movements in the area since 1995. So, for one, unemployment among university graduates had, proportionally, increased more than in any other education sector.

African graduates, Bhorat found, have been the worst hit as they account for the bulk of unemployed graduates. Why so? "Here you get into non-data areas because you start speculating," he cautions. "But there are a couple of reasons for this that one can think of." Firstly, there's the usual suspect of continued (although unofficial) discrimination. There is also what economists refer to as the accumulation of human capital in the wrong fields, which boils down to too many graduates, particularly Africans, in market-glutted humanities-related subjects rather than in, say, the commerce fields.

"The third reason is the perceived quality of the tertiary institution that students attended," says Bhorat. So, for instance, a graduate from one of the more pedigreed universities, like a UCT or a Rhodes, would find more favour with potential employees than would a graduate from, as an example, historically African institutions that are assumed to have less scholarly lustre. A final reason for the jump in graduate unemployment, says Bhorat, could well be the recent restructuring process within the public sector, which saw countless black teachers and nurses lose their jobs.

Also telling - for university graduates of all races - is a 1999 World Bank survey of manufacturing firms in Johannesburg, work Bhorat is citing in a journal article he is penning alongside DPRU senior researcher Paul Lundall. In this study, companies were asked to rank the educational institutions from which they would source employees. Universities came in fourth, well behind private training colleges (which hogged 42% of the vote) and technikons, which finished third.

These numbers may not hold true for all industries or all cities, but are worth thinking about, says Bhorat. "It certainly is an indication of work-preparedness and the movement from higher education into the workplace, which is a transition that requires closer inspection, certainly among universities." One can but assume that students will be chewing over this as well.