Driver praised for service with a smile 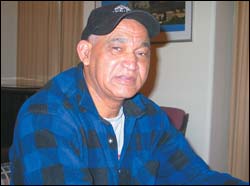 Driving the same route every day would bore some people but not Jammie Shuttle driver George Cogill who has been nominated as this week's Five-Star Staffer.

Having worked at UCT for the past five years (usually on the night shift), Cogill boasts an in-depth knowledge of every nook and cranny of the university's many roads.

It is on his specific route, between residences Tugwell Hall, Liesbeeck Gardens, Forest Hill and upper campus, that Cogill interacts with his many passengers.

"I love to strike up a conversation with the students," he explained. "It takes away the boredom. I tell them jokes or talk about my life experiences and it makes them feel at home. Sometimes they look so sad I like to make them smile."

It is this attitude that students have recognised and praised.

"George is one of the sweetest and friendliest people I've come across. I have been using the shuttle since 2002 and he always has the same facial expression - a big smile," says Varietas resident Maqashu Asithandile.

"Even if George has worked a double shift, he still has a friendly and welcoming face and I find it so easy to talk to him. For me, that is service with a smile."

Cogill noted that it is mutual respect and the students themselves that keep him upbeat.

"Once they climb into my bus and start talking to me, I realise I can overcome a bad day very quickly. I can't be down with them smiling and talking. I must also be happy. We care about each other."

And when the students are quiet and don't have much too say, which is seldom, Cogill carries a radio in his pocket.

Describing himself as a sports enthusiast, Cogill can be found playing cricket with friends and family in the streets of his neighbourhood when he is not working.

"I love going to watch sports matches, especially soccer," he quipped. "And on quieter days I like to be at home reading or listening to music."