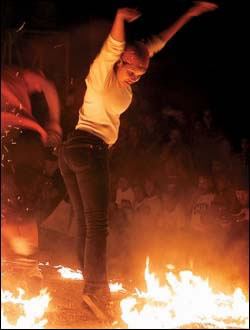 Fire dance: Fire is an essential element in the telling of the San stories during the annual spring lantern parade in Clanwilliam. (Picture Lucy Reyburn)

Like roosting birds, the excited twitter of children's voices rose up in the late afternoon sun outside the UCT field school in Clanwilliam. Waiting restlessly under the bluegum trees, their faces daubed with white, the children were preparing for the spring lantern parade, a much-anticipated annual event in this small town.

Just before sunset, as the distant Cederberg mountains started falling into purple shadow, the procession set off, weaving its way through the streets of the local community, lead by strange half human/half animal creatures on stilts.

In the gathering dark, young and old came out to watch and the barking dogs fell silent as the illuminated lanterns began to glow brighter and the chanting grew louder. For a moment, the poverty and alcoholism endemic to rural towns of the Western Cape receded into the shadows as the magical procession made its way to the local sports field where dancers and actors used fire and shadow theatre to act out this year's theme - the story of a man turned into a tree when a young maiden looked at him. 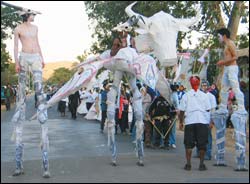 All dressed up: Ready to go, the procession gathers itself together for the evening march.

This project, which has taken root in Clanwilliam, is part of an ongoing collaboration between UCT, the Magnet Theatre and Jazzart Dance Theatre. Its intention is to popularise the stories of the /Xam (San), as told to the 19th century linguist Wilhelm Bleek and Lucy Lloyd.

The Bleek and Lloyd Collection, now housed at UCT, is the only major body of stories collected from the San in South Africa and therefore the only record of the language, ideas and world view of the people who spoke the now extinct language of /Xam.

This year's parade, which took place on September 5, was linked thematically to the recent production by Magnet Theatre and Jazzart called Rain in a Dead Man's Footprints that played to packed audiences in Grahamstown and the Baxter Theatre in Cape Town. 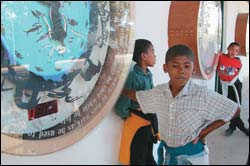 Head of UCT's drama department, Associate Professor Mark Fleishman, said Rain in a Dead Man's Footprints (which he co-directed) was inspired in part by the development work done in Clanwilliam over several years. He believes performing arts should be "performed by the community for the community", which is what has unfolded in Clanwilliam.

For a week prior to the parade, a group of student facilitators held art and drama workshops involving dance, storytelling, shadow puppetry, and arts and crafts, all based on traditional San themes. The facilitators came from the Michaelis School of Fine Art, the UCT drama department, the Jazzart Training Programme and its rural offshoot Namjive, as well as the Magnet Theatre and other drama groups working in Khayelitsha.

Professor Pippa Skotnes, director of Michaelis, was instrumental in setting up the spring lantern parade, and securing funding for the project. Each year, the generous support of Fairheads, one of South Africa's oldest independent financial services companies, ensures the parade can go ahead. Living Landscapes, a long-term, relatively permanent initiative with links to UCT's archaeology department and Professor John Parkington, provides the space for the workshops at the UCT field office located in Clanwilliam.

Getting ready: Furious preparations for the annual spring lantern parade in Clanwilliam, part of an ongoing collaboration between UCT, the Magnet Theatre and Jazz Art Theatre.

For Skotnes, the parade represents a contemporary context for the re-animation of the /Xam narratives. "Art, performance and poetry potentially have the capacity to access and re-animate the creative and intellectual resources of these narratives, while at the same time making them accessible to a contemporary audience," she says.

"As for the future of the project, I would like to continue the collaboration between art, archaeology, oral history and performance, but try to move towards a more sustained intervention throughout the year.

"I would also like to install more artwork at the field station - like the 'clocks' which function as teaching tools and as ways of materialising ideas about time and history." 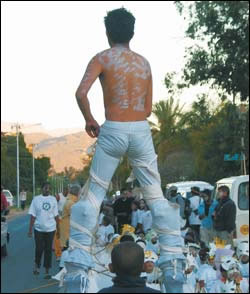 Chairman of the Fairheads Trust Company, Peter Fairhead, also attended the parade this year. His hope is that through their sponsorship and over time, the community will find the entrepreneurial initiative to take the project forward.

Given that the parade happens during the flower season, a peak time for tourism in the Cederberg region, this event has the potential to attract audiences from further afield while culturally enriching a neglected community. Watch this space.