Yachting crew of the first water at Lipton 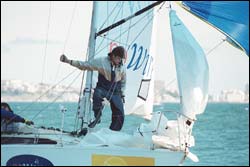 Smooth sailing: Neil Hart makes sure the UCT boat gets the best of the breeze during the Lipton Cup regatta.

The youthful but water-wise UCT yachting team, sailing aboard the university's L-26 class boat, has posted a very respectable ninth place at the 2004 Lipton Challenge Cup, South Africa's premier sailing event, hosted by the Royal Cape Yacht Club at the end of August.

The UCT boat, named No Wire, was one of 25 L-26 boats - each measures 26 feet - that took to the water this year. The crew chalked up a couple of good finishes over the event's seven races, including second, third and fourth places. And while the crew let a couple of leads slip through their fingers, UCT's overall performance was, considering the company they were in, nothing to be modest about. "We're very pleased with what the team achieved," said manager Norton.

Organisers were chuffed as well. For the first time in years they did not have to call off any scheduled races, and could even sneak in one extra. Sailing conditions were perfect over the six-day regatta, with the breeze regularly climbing up to the ideal 25-knot mark.

The UCT team wishes to thank sponsors, No Wire Technologies, a wireless Internet-connection company, without whose generosity their participation in the Lipton Cup would not have been possible.