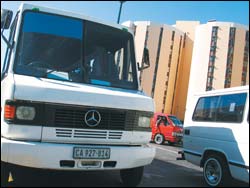 Based on input from staff and students over recent weeks, the university's Access Management Plan - due to kick in next year - has seen some reworking.

According to Professor Martin Hall, the deputy vice-chancellor overseeing the project, the information sessions hosted around campus and requests for staff to make comments and suggestions, or simply to raise questions, have given planners much to think about. It's also helped many - including onetime detractors - see exactly what the university is up against.

"The consultation with the university community has been very successful," said Hall, "and we appreciate the time and effort staff and students have put into thinking about the issue. I think that, as a result of these discussions, many people came to appreciate the complexities of planning for a campus with difficult access issues, and the need to balance personal needs with the needs of the community as a whole."

Hall and John Critien, executive director of properties and services, and their team received more than 100 e-mail comments and suggestions (they replied to all of them). "This helped us a lot in refining and developing the proposals further," noted Hall.

Taking these comments into account, the plan has undergone some changes. So planners are now exploring the possibility of putting bicycle racks on the buses; will pay closer attention to the needs of those on Hiddingh campus and those who travel from the Northern Suburbs; hope to get more park-and-rides up and running sooner; will charge differential rates for motorcycles; and will offer a cash-back incentive to staff who purchase parking permits at the beginning of the year and later change to the bus service. The university is also looking into possible carpool incentives.

The plan was tabled before Council on September 1, and received its blessing.

The Access Management Plan also makes up part of the wider Campus Guide Plan, which will go before Council in December, explained Hall. "The Campus Guide Plan will initiate a wide-ranging conversation with the university, which will shape the development of our campus over the next 20 years."

Hall also expressed the hope that the current goodwill will spill over into those discussions. "Our planning is immensely strengthened by such participation," he said.