If it's September, well, it's got to be Cape Town 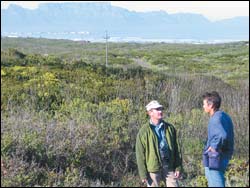 The University of Montana and the Percy Fitzpatrick Institute of Southern Africa at UCT are collaborating on an international nest-monitoring project that links research sites across the globe, from the highlands of equatorial Venezuela to the Koeberg Nature Reserve. The Monday Paper visited the site.

Dr Penn Lloyd cradled the minute scrap of life in his hand - a five-day old Karoo robin - while close by its anxious parent gave a "chip" in warning. Once he'd finished examining it, he carefully placed it back in the cupped nest on the ground, secreted underneath a leafy bush, and the parent birds were ready to bring on the next worm.

The nest and its precious cargo were safe for the moment. Indeed, a casual passerby would not notice it was there, but then Lloyd, and the team who work with him, are anything but casual observers.

Visit the nature reserve surrounding the Koeberg nuclear power station in springtime, and you're likely to spot them - stalking through waist-high strandveld vegetation, sun hats wedged firmly on their heads, binoculars at the ready, hard at work.

These are members of a trusty band of international researchers who spend the three months of spring monitoring the fates and fortunes of the birds nesting at Koeberg Nature Reserve, rain or shine, six days a week. And when they're done at Koeberg, they move on to other sites around the world.

Lloyd explains: "We are looking at how different environments influence the way birds invest in reproduction in different parts of the world. For instance, we look at how adult life expectancy, nest predation risk, climate, and food availability may influence the number of eggs laid, the proportion of the day spent incubating, rates of feeding, and how fast eggs and nestlings develop." 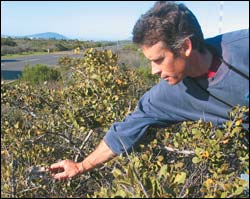 Ingenious: Dr Penn Lloyd at the nest of a Cape penduline tit which makes a conspicuous nest out of seed fluff (mainly from the kapokbos) and spider webs, and then protects it by creating a false entrance. It enters the nest through a spout on the top which it opens and closes with its claws and beak.

For the Karoo robin nestling, survival prospects are pretty slim - only about 10% of all active nests monitored at Koeberg successfully produce fledglings. The rest are prone to a multitude of dangers, including egg-eating snakes, mongoose and other predators.

What makes the Koeberg Avian Life History Project special is that the influence of the exceptionally high nest-predation rate at Koeberg can be compared to other study sites around the world where nest predation is very much lower.

The other sites can be found in the Yacambu National Park in the northern Andes of Venezuela, in high-altitude Arizona in the United States, New Zealand and Tasmania. At each of these places, literally thousands of nests are being monitored, and their differences and similarities compared and analysed.

Here at Koeberg, which lies 34 degrees south, the same latitude as Arizona is to the north, this is the fifth monitored season. By contrast, the Tasmanian project is still at start-up phase, having begun this year.

The man behind the global network, Professor Thomas Martin of the University of Montana, explains: "Global monitoring allows you to see the importance of different factors that aren't obvious in a particular site.

When we first started, for instance, we didn't appreciate the significance of adult mortality. Now that we look across the sites we see that it is an important factor."

An example of this is the small clutches of eggs the birds at Koeberg lay, compared to birds in the United States. This is because many northern hemisphere birds live for only two years and lay clutches of four to five eggs while, by contrast, some species at Koeberg can live for 10 years and typically lay only two eggs.

"A long life, lots of opportunities to breed; a short life and you've got to go for it, baby," says Martin with a grin. Martin is visiting Koeberg for the start of the annual monitoring, just as he does the other sites around the world. Thus, if it's March, you'll find him in Venezuela; in mid-May he migrates to Arizona, and if it's September, well it's got to be Cape Town. With his dark green jacket, and bundu-bashing boots laced up to the knees, he's perfectly equipped for the task of nest-spotting.

Lloyd, a PhD graduate from the Fitztitute (as it is commonly known), and now a postdoctoral fellow with the University of Montana, is the coordinator of the Koeberg leg of the project.

This job sees him rise in the pre-dawn in his home at Kommetjie, at the far end of the Peninsula, and drive through to Koeberg to be there half an hour before the sun rises.

In a season, the team might monitor up to 1 800 nests, keeping tabs on anything between 100 to 200 active nests a day, and also monitoring the growth of nestlings. Then there are the 9 000 hours of video tape that are recorded by a battery of video cameras which each run for six to eight hours a day at selected nests. These are sent back to Montana for analysis. 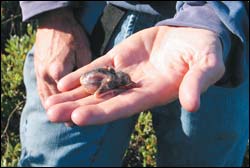 Outside of the nesting season, volunteer ringers from the Tygerberg Bird Club come in to help colour-ring the birds so as to be able to identify individuals for the study. These rings are used to monitor the survival rates of birds.

"They're a tremendous help and an amazing group of people," says Lloyd of the Tygerberg members. In addition, individual researchers have ongoing projects to answer questions, such as what impact a drop in the ambient temperature has on the incubation period of nesting birds. One such postdoctoral project by Dr Rita Covas, who got her PhD at UCT, is to cool the nests using a chilled water coil, and then to compare how much extra energy the females of different species are prepared to expend in incubating their eggs.

For his postdoctoral work, Lloyd is also looking at the effect of incubation-period length on the development of the immune systems of birds. For this, he injects a harmless plant protein into the wing to see what strength of response it evokes in the form of a swelling, like that after a bee-sting. This indicates the strength of the bird's immune system.

One finding, which is challenging the orthodoxy, is the effect of ambient temperature on incubation. At Koeberg, the researchers have observed the strong effect of a drop in temperature on developmental rates.

Contrary to the theory that this has no impact on the length of incubation, they have found that birds might have to sit on their nests for up to four days longer to hatch their eggs if they experience back-to-back cold fronts during incubation.

In addition, the recent announcement of the DST Centre of Excellence in Birds as Keys to Biodversity Conservation, hosted by the Fitzstitute, will see many more research projects coming to life at Koeberg.

Because this study is both global and long-term, the project could well turn up some answers to big questions about bird ecology, such as the impact of climate change.

Says Martin: "If we get a grant to continue over the long term, we will certainly pick up information on climate."