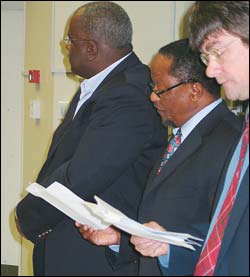 Dedication: Prof Hugh Corder (right), chair of the Academic Freedom Committee, with vice-chancellor Prof Njabulo Ndebele and Prof Jonathan Jansen (left) stand for the reading out of the last paragraph of the Dedication to Academic Freedom, a regular feature of the TB Davie Memorial Lecture.

On August 26, Prof Jonathan Jansen, Dean of Education at the University of Pretoria, gave the 41st TB Davie Memorial Lecture at UCT. His topic Accounting for Autonomy: How Higher Education Lost its Innocence, was an examination of the relationship between the state and higher education. In the lecture he paid tribute to TB Davie, the vice-chancellor and principal of UCT from 1948 to 1955, describing him as a man with a "remarkable sense of anticipation about the changing relations between the state and universities". These are Jansen's concluding remarks.

At the turn of the century, the relationship between the state and universities in South Africa is under renewed stress. How this relationship will unfold, and whether institutions will have more or less or any autonomy in the future will depend crucially on decisions made in the present conjuncture. After brief experiments with participatory governance in the mid-1990s, there is now a concerted move towards greater government control of universities. The first wave of reforms, argues government, resulted in non-implementation and negative effects which "if left unchecked, threaten the development of a single, national, co-ordinated but diverse higher education system."

It is therefore crucial that at this and other forums, the question of academic freedom and institutional autonomy be addressed as a matter of great urgency. Such counter-intervention is necessary for at least two reasons.

The quest for greater and more state control is based on the flawed assumption that the state can best "steer" higher education institutions in the direction of what is too loosely called transformation. There is no evidence for this. On the contrary, there is more and more evidence that profound policies and detailed plans tend to have very little effect on the day-to-day operations of institutions - with one exception: the manipulation and allocation of funding. Here there is a serious challenge since this funding allocation is no longer based on a clear and transparent model in which the rules of the game are clear to institutions. It is vague and complex, without any clear rules except to invest in one minister unprecedented powers to make arbitrary decisions without any downward accountability to institutions.

An Appendix to a submission made by the South African Universities Vice-Chancellor's Association (Sauvca) in this respect is worth quoting at length:

"The new (funding) framework will give the Minister of Education considerable freedom to direct the future funding of higher education institutions ... In effect, the independent formula of higher education will cease in South Africa in 2004 and the benefits of having a system that is certain, objective and devoid of possible manipulation, will be lost to a large degree."

To its credit, Sauvca understood the direct implications for institutional independence: "Former notions of university autonomy, requiring 'arm's length' treatment of higher education, will cease and higher education, for funding purposes at least, will be treated more or less as part of the broader civil service."

Where Sauvca makes a crucial error is to plead for a later reversal on grounds lost: "Sauvca's finance committee has accepted the need to steer institutions in the interests of transformation; a time limit should be imposed to ensure that university autonomy is not permanently forfeited."

Since ministers tend to act on short-term political priorities rather than long-term system gains, the entire higher education sector is placed at deep risk, not only in relation to its basic functioning, but also in its quest for autonomy with regard to academic management. Put differently, there is no evidence that centralised planning models can best achieve transformation goals.

What makes this particular moment in our history so dangerous is not only the silence and the moves towards greater state control, but the attempts by some to negotiate academic freedom through compromise positions such as "conditional autonomy". This is dangerous because it assumes a benevolent state that not only exists in the present to advance the intellectual interests of higher education, but that it will remain a benevolent state well into the future. And this is where the case for institutional autonomy is strongest. One African nation after another has found that as the post-colonial state failed to deliver in the economic domain, and as the state then moved towards greater authoritarian behaviour, the first target was the university. If and when the point arises in the future, on what grounds will the South African university be able to challenge the post-apartheid state?

But the erosion of autonomy also has dire intellectual consequences. In a climate where steering is becoming indistinguishable from interfering, there is less space for the open expression of ideas, less experimentation with alternative programmes, less diversity with respect to research and innovation. The South African obsession with singularity - no doubt an over-reaction to the fragmentation enforced by apartheid - will cost the country dearly in intellectual (but also in economic) terms. One example will have to suffice. The new concern on the autonomy horizon is the threat of installing "a dedicated distance education institution for higher education".

The preferred interpretation of "dedicated as single" institution threatens the innovative and indeed the competitive with respect to the delivery of high-quality distance education programmes across the country, the continent and beyond. If government proceeds with this plan, only one institution will be allowed to offer distance education; continuance on the part of other institutions will be threatened by the withdrawal of subsidy and, quite possibly, a direct order to discontinue such programmes in the former "residential institutions", even if they choose to offer such programmes on a non-subsidised basis. The reality of so-called mixed-mode institutions among leading universities in the world could easily fall prey inside South Africa to this obsession with singularity - and, in the process, threaten intellectual vitality, institutional diversity and professional freedom in the design and delivery of curriculum.

When does the university cease to exist?

It cannot be when a government decree declares some final date by which a university shuts down; or when a large institution engulfs and extinguishes the identity of a smaller one; or when new signage goes up declaring an imagined community. Nor can it be said that a university exists simply because it goes through the routines of graduation ceremonies or that it registers another "intake" of students or even that it teaches them.

But you may recognise another university in which the entire place has been transformed into a commercial centre, the departments called "cost-centres" and the students called "clients", in which every "management" meeting is consumed with balancing the budget in the light of impending subsidy cuts; in which the response to external intervention is one of compliance and consent; in which the accumulation of larger and larger numbers of accredited publications is pursued with relentless vigour; in which teaching is equated with technology; and the mechanics of research confused with the elegance of scholarship. Just about everyone in such a place is in the business of (ac)counting. Here, too, the university has long ceased to exist.

A university ceases to exist when the intellectual project no longer defines its identity, infuses its curriculum, energises its scholars and inspires its students. When the intellectual project defines a university's identity, then only are the conditions set under which academic freedom can be secured and institutional autonomy jealously defended.

On the morning of March 2, 1948, a 52-year-old medical scientist born in Prieska stepped up to the podium of Jameson Memorial Hall to declare to his audience what he called his "intellectual testament" as newly-appointed vice-chancellor and principal of the University of Cape Town. Speaking in the long shadow of the Second World War, the new man at the helm observed and then warned as follows:

"Recent history ... has shown only too tragically how easily and almost imperceptibly universities can be deprived of their freedom until they become mere instruments for the dissemination of dogma and propaganda under authoritarian direction. That no such degradation has befallen the universities of South Africa is to be counted among our blessings; but he who thinks that no such danger exists lives in a fool's paradise."

These words of Thomas Benjamin Davie are as true today as they were in that year when another nationalist party came to power.