Fairy tales and folklore through the looking glass 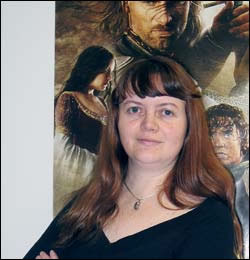 The Disney videos on Dr Jessica Tiffin's bookshelves in the English literature and language department seem curiously out of place against the classics by Mary Shelley, Lewis Carroll, Bram Stoker and Hans Christian Andersen.

The postdoctoral researcher (her work is underwritten by a Mellon grant) has a penchant for fairy tale and folklore, as her thesis and surroundings reveal. On the wall, JRR Tolkien's sword-wielding Aragorn bursts from a poster, intent on claiming Middle Earth from the evil Sauron. Alongside, Keanu Reeves' Neo views the Matrix through dark lenses, his signature black coat spread like a Gothic villain's cloak.

In a family lineage of scientists and naturalists, Tiffin is a nonconformist; a devourer in her youth of non-realistic literature, fed by the Brothers Grimm and James Thurber. In 1988 Tiffin began her long academic relationship with UCT, culminating in a PhD in June last year. The Mellon grant allows her to continue her research into the narratological aspects of 20th century writers like AS Byatt, Angela Carter and Thurber (whose texts are central to her thesis), who have used the adaptable fairy tale in new and surprising ways.

"They play with genre, reinventing the old forms and structures to suit contemporary themes; modern fairytales with old structural roots," Tiffin says. "I'm fascinated by the interplay between literature and culture where meaning and structure interact."

In addition to texts by these authors, Tiffin is interested in films as narratives and has included eight titles in her study, including Neil Jordan's The Company of Wolves as well as several Disney titles: Beauty and the Beast and Lilo and Stitch.

The quest narrative, for example, is a very old form of folklore, grounded in feudal society, one that was very class- and gender-specific and not very appropriate for contemporary society. Nonetheless, themes like these persist, and some forms have become ingrained in the modern consciousness.

"These folkloric stories are part of the West's cultural heritage, just as African folklore has similar patterns and are similarly embedded in the African consciousness. They are carried over in an oral tradition arising from folklore; stories told by a culture to itself and told by a community to a community."

Even in the Disney production, Lilo and Stitch, contemporary folklore replaces the old; there are hints of alien abduction, and Elvis is an ever-present figure, one that has become rooted in the American imagination.

AS Byatt writes that modern feminists have used the "irrationality" of fairy tales to explore female desires and dreams.

"They have also rewritten narratives to provide powerful heroines, sometimes arguing that all women in the original fairy tales were meek victims, which is simply not true. There are plenty of resourceful princesses and peasants and goddesses - that is one of the pleasures of the other world."

Feminist writers like Carter have woven fairy tale elements into the structure and narrative of their tales. Using the archetypes and stereotypes of Beauty and the Beast, Carter wrote "amazingly playful things", says Tiffin.

In The Tiger's Bride, Beauty becomes a Beast, turning into a tiger, and Carter uses the animal motif to express Beauty's powerful sexuality, recreating an original story.

Part of the richness of the fairy talk heritage lies within the multiplicity of layers within the simple tales. In Little Red Riding Hood, for example, psychoanalysts cast men as wolves, sexual predators devouring innocence, a theme echoed by Jordan in The Company of Wolves: "The worst wolves are hairy on the inside". The layers go far beyond the fable's original and simple message: don't go into the woods at night. 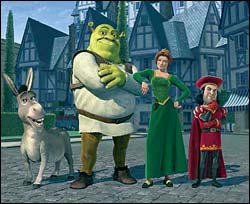 The Disney productions, on the other hand, are marked in their use of idealised symbols, kowtowing to a mass market culture, resulting in "spurious folklore."

Nonetheless, these are the versions of fairy tale that children grow up with.

In Treasure Planet, the stereotype slips, but only momentarily. The ship's captain, the feline and "whipsmart" Captain Amelia, steers the galactic ship past all manner of danger, but misses the action at the end when the young Jim Hawkins can "prove his manhood and prevail". Similarly, Aladdin's Princess Jasmine goes adventuring, unchaperoned, but she ends up safely married.

"Disney's sense of fairy tale as artefact is subordinated entirely to the need to present tale as commodity within the Disney consumer culture," Tiffin notes.

On the other hand, DreamWorks' Shrek films present a more sophisticated rewriting of the fairy tale, parodying Disney's versions.

"It an acutely culturally-aware text", says Tiffin. It playfully inverts things when the princess becomes an ogre to claim her prince (a monster), moves to a swamp, and the supposed hero, the prince, is an effete metrosexual, with hair more luxuriant than the heroine's.

"Shrek serves as paradigm for the development of the fairy tale in the twentieth century, continuing the form's function as adaptable folk narrative which self consciously and affectionately reflects the form's structures and assumptions as well as those of contemporary culture.

"The enormous range of media in which fairy tale has found expression covers the whole spectrum from intellectual exploration to commercial reworking, confirming fairy tale's continuing power as a folk form which can be self-consciously employed in a variety of contexts."

Shrek's version of the beauty myth is perhaps its most startling aspect, says Tiffin.

"In Hollywood, the princess is always beautiful. To be famous and successful , you must always be beautiful."

Despite the age of the fairy tale tradition and its focus on fairly primitive aspects of human existence, these fables and myths are adaptable to a range of cultures and contexts.

"Stories of poor-man-makes-good, winning the pretty girl, is peasant wish-fulfilment, the desire for Utopia and desires for wealth and status.

"Self-conscious literature is very exciting. It's a very intellectual game where the text is packed with layers and layers of meaning between old and new text in an enormously powerful process."

Tiffin is also interested in children's and young adult fantasy literature which also fits into her interest in non-realist genres.

"I have a side interest in formulaic series genres such as school stories, which covers the other aspect of my research interests: Harry Potter. Harry Potter is particularly interesting because the books cover both aspects, being series fiction with a school-story formulaic aspect, but a fantasy framework.

"I am somewhat cynically inclined to think that at least some of the success of the HP book is savvy marketing; as children's literature goes I wouldn't say JK Rowling is a great writer. Her works are, however, exceptionally enjoyable. My personal theory is that they tap into a kind of nostalgic (and rather simplistic) pleasure which works well for both adults and children.

For Tiffin there is also a tendency for a fantasy universe to be particularly clear-cut and unambiguous. "This ends up overlaying the already well-defined moral issues of a school story so this one ends up with an egregiously utopian sort of fog over the whole thing."

Harry, however, though he has to battle his way through seven promised books, is bound to live happily ever after. JK Rowling's readers simply wouldn't have it any other way.