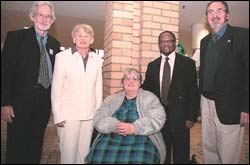 The UCT Mathematics Competition has far exceeded the modest expectations of its founders.

Sometime in 1976, maths teachers Shirley Fitton, Mona Leeuwenberg and Lesley Reeler, invited school pupils to what they thought would be a modest little maths bee at Westerford High School. No-one really RSVP'd, but ever optimistic the three set up places and snacks for around 60 pupils. "Then the students arrived in busloads," recalls Reeler.

Four years later, it had become clear that Westerford simply couldn't cope with the numbers of pupils turning up for the contest. "It was so ginormous," says Fitton. In 1980, they moved the competition to UCT.

Initially, the relocation was seen as just a temporary spatial arrangement. But after a few more growth spurts, the school formerly handed over ownership and management of the event to UCT, although teachers from around the province lend a big hand with the running of the competition.

And as vice-chancellor Professor Njabulo Ndebele pointed out at a function last week, held to commemorate the 25 years that the contest, now known as the UCT Mathematics Competition, has been staged at UCT, even the university has been stretched to keep up with the event's popularity. Ten years ago, 3 000 pupils took part - this year, even after capping numbers, UCT had to host 6 000 competitors.

"What is popular about the event is that pupils get to come onto campus," says Professor John Webb, who's been involved with the competition since its early days at Westerford. As pupils progress through the school grades and competition levels, they are also "promoted" from one UCT venue to another (grades eights write in the mathematics building each year, for example, while the grade twelves get to stretch their legs in Jameson Hall). "By the time they've been through the competition, they've also been in every major building on campus."

And when it comes time to decide where to study after school, students may well opt to head for the university they've grown so accustomed to, Webb suggests.

But the competition serves as more than just a marketing ploy, Webb adds. "I think it's persuaded a lot of students to regard maths as something they can take up seriously." Theoretical mathematics, applied mathematics, computer science, physics and genetics are but some of the fields that beckon, he says. For maths fundis, it would seem, career opportunities are hard to keep count of.