Staff and graduates give Olympic team a booster 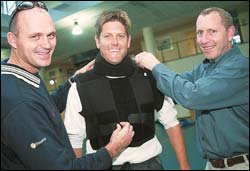 When South Africa's Olympic athletes get a funny feeling in their stomachs - be it cramps or butterflies - a UCT sports physician and a UCT-trained sports psychologist will be among those they can turn to in Athens.

Associate Professor Wayne Derman, based with the UCT/MRC research unit for Exercise Science and Sports Medicine (Essm), is chief medical officer for the squad, heading up a medical support team of nine that includes one other medico, a sports psychologist and six - yes, six - physiotherapists. Keeping the athletes in the right frame of mind is sports psychologist and Olympic debutant Clinton Gahwiler, who completed his psychology studies at UCT and runs a private practice out of the Sports Science Institute of South Africa in Newlands. He also gets roped in occasionally to teach on Essm programmes.

Athens marks Derman's second tour of duty with an SA Olympic team, having served as chief medical officer with the envoy in 2000. As he did four years ago, Derman oversees each athlete's overall medical preparation for the games. So, at camps over the year, he and his team have given each member of the squad a thorough medical going-over.

And while allergies (the 2000 Olympics coincided with the peak pollen season in Sydney) and jetlag headed the list of concerns in Australia, Athens has its own headaches. Allergies are a worry again, although this time it's caused by pollution. But it's the searing heat and humidity of Athens - where the mercury is expected to hover around the 30-degree mark and humidity reaches 90% - that's the main priority for the medical team. Which is why athletes have spent plenty of time in heat chambers in South Africa to steel themselves for what's coming in Greece. And why Derman and colleague Justin Durandt have also come up with a solution of their own.

Taking pride of place among the bag of technological goodies Derman is lugging to Athens - kit includes a machine that measures brain waves and which will be used to teach athletes to up their alpha-wave activity associated with peak performance (the prized "zone" athletes speak of) - is an "ice jacket" designed by Derman and Durandt and manufactured by Medac. Inspired by Nike's Precool ice vest, one of many innovations big-name brands will be flaunting at the games, the jacket is made of neoprene (the same material wetsuits are made of) and holds iced gel packs in eight pockets around the jacket. The jacket, when wrapped around the athlete, cools the shoulders and front, as well as the heat-storing armpits. Their studies have shown that the jacket, which athletes will wear before, during breaks and after events, drops the skin temperature by as much as 23 degrees within two minutes. "We know it's effective in cooling the peripheral temperature," says Derman, "and we hope that it will give the body greater capacity to go out and store heat again." 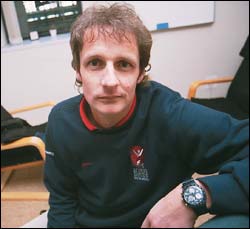 Mind power: When South Africa's Olympic athletes need someone to talk to, psychologist Clinton Gahwiler will be among the first on their list.

Derman and Durandt have also upped the ante with a collar that athletes can slap around their neck, where some big blood vessels are located. The collar is also in keeping with the central governor theory Essm's Professor Tim Noakes, Associate Professor Alan St Clair Gibson and Associate Professor Vicki Lambert are exploring, and which argues that the brain, not the muscles determines fatigue. "When the governor [the brain] gets too hot, it shuts down the rest of the body," explains Derman. By keeping the brain - and the body - cool, athletes should be able to keep going for longer.

But keeping the athletes going is more than a physiological thing, says Gahwiler (the surname is an heirloom from the Swiss side of his family), who practices the art dubbed as the last frontier of sports science. "The mind is just one of many factors which determine sports performance," Gahwiler says. "And it's the one factor which is traditionally overlooked."

Which means that South African athletes often have limited experience of sports psychology. "At the moment one still finds even elite athletes who haven't had training in sports psychology principles, so you're still sometimes educating around basic stuff." His task, he points out, is not to give pep talks.

"I'm not a motivational speaker. My job is to teach athletes to motivate themselves."

For his work with the South African Olympic team, Gahwiler often takes on a broad load - he helps athletes deal with everything from panic attacks to relationship problems. And as part of a team-building exercise, he even penned a song that he performed with his acoustic rock band Flat Stanley, kwaito artist Andy Magazz and, delivering the chorus, the Olympic squad. The ditty, Feel the Heat, is now considered the official SA Olympic 2004 theme song and is enjoying respectable radio airtime.

In Greece last week, Gahwiler and Derman had to put the fun times behind them, though. According to Derman, the athletes had quickly acclimatised to the heat, but unexpected obstacles were cropping up - free ones showered on them by sponsors. "This includes a choice of 20 main dishes, 20 salads and about 10 desert choices at each meal, unlimited McDonald's, unlimited soft drinks at all times, new clothing and even gifts of suntan lotion and toiletries, as well as Internet cafes and Playstation 2 games around each corner." But the novelty has thankfully worn off, he adds. "Most have got all this out of their system and are totally focused on the task at hand."

Good thing too. The last thing the medical personnel have to worry about now are ballooning waistlines.