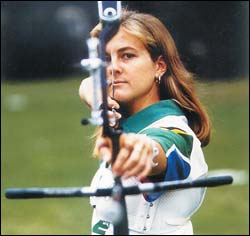 In sight: Jill Borresen at the archery line. Though the honours student in sports medicine has two Olympics under her belt, she is targeting master's and PhD titles instead.

Archer Jill Borresen, an honours student at the UCT/MRC Unit for Exercise Science and Sports Medicine (Essm), at the Sports Science Institute, remembers the bomb blast at the Atlanta Games in 1996.

Though it happened at night and far from the athletes' village, she recalls waking to heightened security measures in the village. Unbeknown to her and her sleeping teammates, the South African team officials had done a head count, going from room to room, shortly after the blast.

"For about a week afterwards, security was hectic."

With the games presenting an easy platform for political intent - or malcontent - Borresen understands the pressures. The Athens games come in the wake of the war in Iraq and the rise of Al Quaeda networks across the globe. But Borresen believes strict security measures around the athletes put them at ease in Atlanta.

"As an athlete you're far too caught up in your own preparations to worry about security," she added. A philosophical outlook, she adds, also helps: what will be will be.

Archery was first introduced to the Olympics in 1900 but suspended after 1920 and reintroduced only in 1972. Borresen took up the sport at the age of 10 and was shooting the Fita (the international governing body of the sport) Olympic benchmark scores of 1 200 by 1992. In fact the 1992 Olympics saw the debut of the Fita Olympic round, a championship round of single-elimination, head-to-head matches, affording the event some edge and improving it as a spectator sport.

Bow in hand, Borresen began competing at the two-yearly world championships from 1993, taking her all over the world: Turkey, Indonesia, Canada. An architectural studies graduate from the University of Natal ('95), Borresen says she was fortunate to have bosses who understood her training demands, especially her preparation for Atlanta.

"It was the best and worst experience," she says of these games. Though she had performed well at the previous year's world championships, she was ill prepared for the "sheer enormity" of the event.

Stepping onto the archery line, her legs turned to jelly. She had expected the first six to eight arrows to be bad.

"But the wheels just fell off."

Technical and coaching problems had left her frustrated before the start. But the experience was invaluable in preparing for Sydney. With a new coach and having been "rebuilt" as an archer, Borresen fared far better in Australia in 2000, qualifying 18th out of 64 competitors in the elimination rounds. (Having whittled down the field, the competition becomes a straight knockout event.)

The world's top contenders these days are the South Koreans; groomed from an early age and bolstered by attractive facilities and packages, they train fulltime.

"I think it's the zen aspect of their religion, that strict mental perspective that gives them the edge."

As a top archer, she has a unique practical and applied aspect to add to her sports science studies. With a BSc in biomedical sciences from Natal, she's back in harness for honours at Essm. And it was the Essm's testing and training camps for the Olympic team that whetted her appetite for sports medicine.

"I became interested in the physiology of an exercising body." Under Professor Mike Lambert's supervision, Borresen is researching the various effects of muscle damage during exercise.

For now, she has put aside her bow and arrows (limiting herself to occasional South African championships) to get through a rigorous honours course. Master's and PhD titles are the targets.