Long road ahead for women researchers 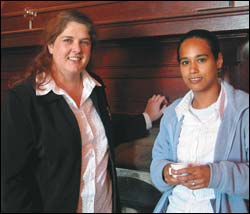 Rubbing shoulders: Prof Susan Bourne (chemistry), left, and Dr Diane Wilcox (mathematics and applied mathematics), were among the guests at the Women in Research function to celebrate National Women's Day.

SAWISE chair, Professor Anusuya Chinsamy-Turan (zoology), made a special presentation on women in research, and although the stats looked poor, she decided to forgo the "oh, no there are too few women in science", tack for a more upbeat prognosis.

Chinsamy-Turan also provided data that showed how the numbers of female rated researchers (nationally) have increased over the past 20 years (from as few as 24 in 1984 to 271 in 2003).

UCT, by the way, has 37 women researchers with National Research Foundation (NRF) ratings with two B1-rated women researchers: one in science and one from humanities. South Africa has a paltry two women ranked among the country's 44 A-rated researchers: the University of Natal's Professor Patricia Berjak (plant sciences) and Wits' Professor Claire Penn (linguistics). Nationally though, UCT has the highest number of rated researchers (213), with the highest representation of A-rated men (16).

Chinsamy-Turan believes the progress achieved in the 10 years after democracy has been underpinned by government support, mainly through the White Paper on Science and Technology, the South African National Research and Development Strategy document, equity legislation, and various NRF initiatives. There had also been an increase in institutional support for women researchers here at UCT.

Nonetheless, the bottom line remained: women in the scientific community still have a long way to go. As author Harriet Zuckerman (et al) wrote in The Outer Circle: "Science remains dominated by men, not only numerically but in the exercise of authority, power and influence. "