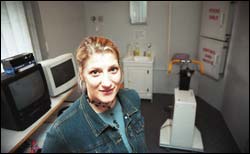 Big Sister: Dr Lara Keytel in the metabolic chamber where she hopes to determine the metabolic rate of a group of African and white women.

Fancy a break from the day-to-day drudgery and routine, tucking away at some gratis Woollies goodies and, for good measure, doing your bit for science? Well, if you are an African woman or a white woman and have a body mass index of 30 or over (see box below), then Dr Lara Keytel of the MRC/UCT research unit for Exercise Science and Sports Medicine (Essm) may have just the 24-hour getaway for you.

Keytel and dietetics honours student Ronit Cohen - along with colleagues Courtney Jennings and Yael Joffee, and Drs Julia Goedecke and Malcolm Collins - are running a project in which they want to scrutinise the how and why of obesity. To do so, each is tackling the problem from a different angle. There is a common denominator in their respective studies, however - all are concentrating on the differences in obesity among African and white women, taking into account the interplay between genetics and environment, says Keytel.

For their study, Jennings and Joffee are genotyping blood samples from some 500 women from the two groups, investigating the genetic triggers associated with obesity and its associated health outcomes. In turn, Goedecke is focusing, in particular, on the distribution of body fat and the metabolic behaviour of body fat in specific layers - superficial and deep to the skin, and the body fat concentrated around the internal organs.

To see if the same holds true for African and white women in South Africa, Keytel hopes to measure, as accurately as possible, the metabolic rates of a group of around 60 women, some lean, most obese. And while there is a mixed bag of metabolic-rate calculations available - Keytel came up with a few novel ones of her own for her doctoral studies - the best way to pin it down is to closet a subject in a tailor-designed "metabolic chamber" for 24 hours. "It's the absolute gold standard of metabolic measurement," says Keytel.

The only snag for Keytel was that there were no metabolic chambers in South Africa or, for that matter, the entire southern hemisphere. Until she built one as part of her doctoral work, that is. In fact, her supervisor, Associate Professor Vicki Lambert, insisted that Keytel finish the chamber before she signed off on Keytel's PhD (Keytel graduated in June).

Keytel, working off little more than e-mailed instructions from Paul Schoffelen, an engineer at the University of Maastricht in Amsterdam, Holland, had to build and assemble the facility and equipment from scratch. Willem Krige of Cape Technikon, using LabVIEW software provided by National Instruments South Africa, developed the intricate software to run the chamber.

Housed in a lab in Essm's quarters at the Sports Science Institute of South Africa in Newlands, the metabolic chamber is one of only 18 or so in the world. It is also, as pointed out above, the only one in operation in the Southern Hemisphere (eat you heart out, Australia).

A subject's 24-hour stay kicks off at 17h00 in the evening (this is preceded by a dietary analysis so subjects can be fed meals that closely match those normally enjoyed). After some tests, the subject enters the one-room chamber at 18h00. The following 23 hours follows a strict routine - there are regular meals, courtesy of Woolworths, two gentle half-hour training sessions, and plenty of free time for watching videos or television, reading the magazines that are provided, catching up with the family (cellphones are allowed) and surfing the Internet. Meals are passed through the first of two special portholes, and waste (leftovers, fresh urine samples, number twos) is picked up through the second.

And despite the Big Brother setting - or Big Sister, as the researchers have it - privacy is guaranteed as Keytel, who bunks down next to the chamber and is within intercom-reach for the duration of the trial, keeps strict - often harsh - watch over access to the lab.

And science is served, of course.