Women too strong for local rivals 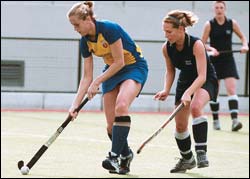 In check: UCT's Leshane Luscombe (right) keeps a watchful eye over WPCC's Nadine Dalling in their recent match, won 3-0 by UCT. Luscombe came on as a second-half substitute and scored one of UCT's goals.

Kept in check for the first 35 minutes, the women's hockey first team found its goal-scoring nick in the second half of its game, played on July 24, against the Western Province Cricket Club (WPCC) to finish strongly and win 3-0.

After a goalless first half, Jessica Glass broke the deadlock soon after the restart and scored UCT's first goal. WPCC proved to be no walkover, however, and took the game right back to UCT. Determined defence by the likes of skipper Natalie le Brun and Kerry Skinner snuffed out numerous WPCC attacks though. And with WPCC throwing themselves into attack in numbers and leaving only a skeleton defensive row, UCT was allowed a couple of goal-scoring opportunities on the break. It was from one of these surges from defence that Glass set up "super sub" Leshane Luscombe for UCT's second goal about midway through the second half. Sarah George knocked the nail into the WPCC coffin soon thereafter when she snuck in the UCT third.

The win cemented UCT's second spot on the WP Grand Challenge log, 12 points clear of third-placed WPCC, although the latter has one game in hand. And there's little chance that UCT will catch up to the indomitable Stellenbosch side, who leads the log by eight points (also with a game in hand over UCT) and has conceded only one goal over its 12 games this season. UCT had an opportunity to make some inroads into that lead when the two sides met over the past weekend.

The men's A side did its title defence some serious harm when it unexpectedly went down 0-3 to WPCC A on July 23. The side remains in second place, albeit two points behind leaders Central who have a game in hand. But WPCC A is now breathing down UCT's neck for that second spot. WPCC trail UCT A by two points, but also have a game in hand.

In turn, the men's B side was held to a 1-1 draw by WPCC B. UCT B is second from bottom, but four points clear of WPCC B.