Through the millennia, travelling the seas in a shark 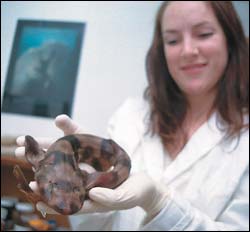 The biggest marine parasite MSc student Eleanor Yeld knows of measures nine metres (as long as a large green anaconda) and is two centimetres in diameter. This nematode, or worm, is found in the placenta of the sperm whale. Equally extraordinary are the parasitic tapeworms, as dense as seaweed forests, that live in the guts of sharks.

Thankfully, the marine parasites on her desk (safely behind glass, swimming in alcohol) in Professor Charles Griffiths's laboratory are a lot smaller, some even microscopic. These have been gathered from a group of catsharks (Scyliorhinidae) she is studying.

Parasites are ubiquitous, forming one-quarter of the world's described fauna. "A quarter of what we know," she corrects, "although this is thought to be a gross underestimation, since parasites form an understudied area and have been far less researched than free-living species.

"It's all mine," she jokes. It's not far from the truth; Yeld is something of a rare species herself, the only fish parasitologist-in-training at UCT and one of very few in the country. (Yeld's inspirational mentor, Professor Bryan Davies, who trained as a parasitologist, retired recently.)

The subject is vast, frustratingly so for a young researcher forced to apply blinkers to restrict her focus for her MSc, supervised by Griffiths and fish parasitologist Dr Nico Smit from RAU.

Not only are marine parasites - leeches, tapeworms, flatworms and even gut bacteria - opening new areas of study, they are prompting some puzzling ecological questions among conservation biologists. For example, as shark species evolved over the millennia, did their parasites diverge with them? And if certain species become extinct, will their parasites be snuffed out alongside them, closing vital chapters of our evolutionary history?

The subject was explored in a recent NewScientist (March 27, 2004) piece on white rhinos and the parasitic rhino maggot. Author Matt Kaplan agrees that while "Save the rhino maggot!" doesn't do the trick as a conservation appeal, it recognises that every charismatic animal facing extinction is an ecosystem in its own right, a mother ship to a host of organisms that may be equally engendered.

"Relatively little is known about catsharks and even less about their parasites, especially rates of infestation, abundance and biology," Yeld explains. "My work will play an important part in documenting South Africa's rich marine invertebrate biodiversity. There is a huge degree of endemism, so we're pretty sure the parasites are also endemic." 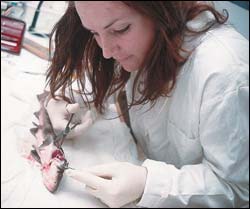 Dissecting an endemic dark shy shark, looking for parasites: worms, flatworms and leeches. Marine parasitology is a hugely understudied area, adding to the list of species all the time. The southern African coastline supports over 11 000 described species, more than 31% of which are endemic.

The initiative grew from her honours project in 2003 on one of the catsharks, the dark shyshark (it coyly covers its eyes with its tail when stressed) or Haploblepharus pictus. Her MSc will be the first detailed report of parasites in catsharks.

"It's general ecological work, a primary study, so it's almost a pilot project."

These are collected from six sites ranging from Lambert's Bay to De Hoop Nature Reserve (Yeld is a Class IV diver, licensed for commercial and scientific diving).

She spends a lot of time hunched over a microscope, documenting each parasite, drawing and labelling the parts for identification and study. Then there is dissection work in the wet lab. In her white coat, Yeld lays open her instruments, much like a surgical array. She removes the shark from the shards of ice (it acts as an anaesthetic), measures it, sexes it, examines the skin for external parasites like small brown leeches and copepods, and prepares it for dissection.

The incision through the spinal chord at the base of the brain kills the shark quickly (all done according to the animal ethics committee guidelines). It's clearly not a job she enjoys. It must be done quickly so she can take fresh blood smears. The parasites found in the blood take weird and wonderful forms, most unknown and mysterious protozoans.

Slitting the belly, she extracts the contents and begins snipping through viscous intestines and ruby red gills, searching for minute parasites with her forceps; isopod larvae in the gills, nematodes in the stomach, copepods (tiny crustaceans) on the skin. A tiny, convoluted worm is spied in the intestine. She plucks it out carefully and puts it into a phial with alcohol. The tiny suckers are just visible at the end, like eyes. 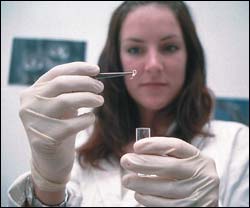 No known metazoan animal is free from parasite infection.

Mysteriously, she had also found trypanosoma living in the blood plasma, the same genus that causes sleeping sickness.

"We have already found three or four new species of parasite just from examining these catsharks," she says.

The true definition of a parasite is that it is harmful to the host. But, parasitic organisms fulfil different roles at different times; at one stage they may be harmful or pathogenic, commensal (neither harmful nor beneficial) or even symbiotic or beneficial to the host. It's not yet understood what each of these parasites does, but she's sure the worms found in the gut can't be good. They attach to the stomach lining, either feeding on stomach or the contents of the shark's gut. She suspects it is the latter.

The daughter of the dean of CHED, Professor Nan Yeld, and renowned environmental writer and photographer for the Cape Argus, John Yeld, she says it was undoubtedly her father's interests that swung her towards zoology.

"He took me along when he went to research his stories," she recounts.

But it's the trips she couldn't go on that she remembers most.

It was during a high school trip to Etosha that she met a woman studying anthrax in wildebeest. It pricked an interest in parasites and disease in wildlife.

"I think my dad was disappointed I didn't choose something cuddlier," she says.

Later, we joke about the one-liner: "So, what do you do?"

Yeld usually begins with the broad "Marine biologist". Failing that, "Shark parasitologist" usually dries up all other enquiries.

She's also used to the romanticism attached to the tag of marine biologist. Another frequently asked question is: "Do you swim with dolphins?"

Actually, it's sharks, with smelly bait bags and collection nets, sometimes at night when the larger shark cousins lurk beyond kelp beds. Nothing romantic in that.