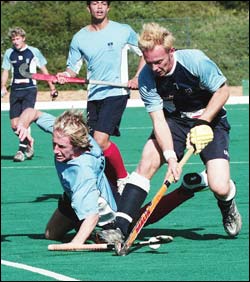 Going down: Craig Ross of the UCT first team (right) collects the ball as the UCT B's William Holn stumbles. That was much the story of the derby as well, the A side beating the B team 6-1.

Be in no doubt - the men's hockey second team (UCT B) is a far better side than the recent 1-6 drubbing they suffered at the sticks of the first team (UCT A) suggests.

But, its ranks depleted by the draft of some of its players into the first team, the side is now - alongside Western Province Cricket Club B - languishing at the wrong end of the Grand Challenge log. Again, this is not a fair reflection of what the side is capable of. After a torrid start to the season during which they regularly got walloped, the players have slowly begun to give a good account of themselves. The defeat to the first side is, however, a setback, and the side's relegation worries have deepened.

But even first team coach Pierre le Roux feels the second team should do well in the season-closing event. There, the bottom four sides on the log will play each other in a round-robin event to decide who goes down (one team) and who stays up. (The top four teams will be vying for championship honours in an identical but separate playoff.)

The first team, however, is plenty chuffed with its performance in the match. They're still neck and neck with Central, and the win takes them one point clear at the top of the log (at the time of going to print, Central still had one game in hand).

The thrashing is satisfying for another reason - in the first UCT derby of the season, the second team had surged back from a 0-2 halftime deficit to draw the game 2-2. The first team "fell asleep" during that second half, says Le Roux. This time, however, UCT B was allowed no reprieve. After a 3-0 lead at halftime, UCT A scored two quick goals early in the second half to put the match well beyond UCT B's reach. The second team must take some blame for the defeat though - they squandered a couple of goal-scoring opportunities in the first half, chances that, had they been converted, might have put a different spin on the game.

Le Roux, however, has little sympathy. "We got burned last time. And you know what they say - once bitten twice shy."

Don't count the second team out, however. Should they survive this season and keep their place in the Grand Challenge log, they may just - as the team gels - find their sea legs in 2005.