Dark side of the universe 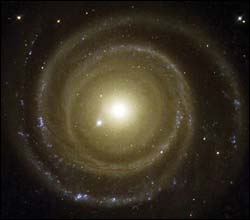 NGC 4622: One of the estimated 50 billion galaxies in the universe.

Renowned cosmologist Tony Readhead will deliver a public lecture titled The Dark Side of the Universe: Dark Matter, Dark Energy and Black Holes at 13h00 on Wednesday, July 28. The venue is Leslie LT 2A.

Readhead, who is travelling the country during July and August, is the South African-born Professor of Astronomy at the California Institute for Technology (Caltech) in the United States. His major research areas include cosmology and the formation of structure in the universe, active galaxies, gravitational lenses and high-resolution imaging techniques.

His key scientific achievements include the discovery of interstellar scattering (with Antony Hewish) in 1972, the same year he pinpointed an extraordinarily compact object in the galactic plane, subsequently identified as the first millisecond pulsar (rapidly-spinning stellar remnant with a very strong magnetic field; what is left when a very massive star explodes at the end of its life).

An array of radio antennas mounted on a platform, the CBI creates high-precision pictures for astronomers to measure the geometry of space-time and other fundamental cosmological quantities. Reports from Caltech said recent CBI results had provided evidence that the universe is "flat". The data also yielded a "good measurement" of the amount of the mysterious non-baryonic dark matter, matter that differs from the stuff everyday objects are made of. The result also showed that "dark energy" plays an important part in the creation of the universe.

In a press release at the time, Readhead said: "These high-resolution observations give a powerful confirmation of the standard cosmological model. Moreover, this is the first detection of the seeds of clusters of galaxies in the early universe."

The release continued: "The flat universe and the existence of 'dark energy' lend additional empirical credence to the theory of 'inflation', which stated that the universe grew from a tiny subatomic region during a period of violent expansion a split second after the Big Bang - a popular theory to account for troubling details about the Big Bang and its aftermath."

This talk is part of the National Astrophysics and Space Science Programme (NASSP) Colloquium Series.