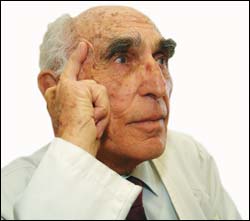 Dr Martin Singer has a firm handshake. It augurs well for the 83-year-old hand specialist who after 47 years in orthopaedic surgery, mostly at Groote Schuur Hospital, is the first South African and African to receive the Pioneer of Hand Surgery award, presented by the International Federation of Societies for Surgery of the Hand (IFSSH) earlier this month in Budapest.

A scant 12 surgeons worldwide have received the accolade.

"Academically it is a monumental honour for me, the unit, the department, UCT and our country," Singer says.

Awardees have all contributed to the development of hand surgery in their own countries and are regarded as leaders and pioneers in the field.

On this Wednesday morning, Singer is at work in the GSH hand clinic, a haven to 60 to 90 outpatients each session and a facility that was renamed The Martin Singer Hand Clinic in 1999.

Singer is amused: most of the patients don't connect "the old guy" with the name plaque.

Hand injuries, especially work-related, are some of the most commonly treated in emergency rooms. Anatomically, he says, the hand is one of the most intricate and complex parts of the body, the various parts contracting, gliding and working together: joints, tendons and muscles, arteries and nerves. Injuries to the hand can be life-changing, often needing multiple surgeries, lengthy counselling and rehabilitation.

"Le mouvement est Ã  la vie," he says brightly. "Without animation, the hand is a paperweight."

And yes, there have been discernable trends in hand injuries; modern ailments like carpal-tunnel syndrome, when the median nerve is compressed, usually through wrist stress due to repetitive movements, like tapping away at a keyboard. But there are more disquieting tendencies - gun shot wounds to the hand, for example, have risen by 500% in four to five years.

There was such an injury this morning. The patient had been caught in gang crossfire, a bullet shattering the middle phalanx of the index finger. Singer describes a lengthy recuperation after reconstructive surgery using bone from the hip.

"The finger will function," he forecasts, "but it will never be the same again."

Singer is a dyed-in-the-wool UCT alumnus; he graduated MBChB in 1944 with first class honours.

After the war, he went to the United Kingdom, keen to become a paediatric surgeon. But fate took another turn when his brother suggested he apply to the Royal National Orthopaedics Hospital in Middlesex.

"It was a sleepy country hospital where I thought there would be plenty of time for study. But (Sir) Herbert Seddon took over and revolutionised the place, attracting surgeons from all over the world."

Singer trained with luminaries like Jackson Burrows, a pioneer in limb salvage, and David Trevor, a world authority on congenital dislocation of the hip.

In 1951 he became a Fellow of the Royal College of Surgeons (England). He returned to South Africa in 1956 and after going into private practice, also worked at many of the province's hospitals, including the Red Cross Children's Hospital, the Cerebral Palsy School and the Maitland Cottage Home, where he was surgeon for 25 years and afterwards honorary superintendent until the present.

Forming the hand unit was a hard-fought battle. The notion of a hand unit outside the orthopaedic unit was unpopular.

"I had to resign from orthopaedic surgery and join the general surgery department," he recalls.

Nonetheless, Singer describes the years 1966 to 1998 fondly: "my love affair with hands". GSH was the first hospital in the country to have a dedicated hand unit, albeit a humble affair behind a screen in the old trauma unit. The team worked without even rudimentary equipment.

That he later invited plastic surgeons to be part of the team was part of his inherent visionary approach to hand surgery.

And once the microvascular laboratory was established in the surgery division, Singer made it mandatory for all hand registrars to train in microvascular techniques at least once a week during their six-month stay. They work on rats, one of two units in the country that does so.

"It teaches them finesse," Singer says, describing thread no thicker than hair and needles so thin they're almost invisible.

Even his wife, Joy-ThÃ©rÃ¨se, was once employed to assist in the hand clinic before their marriage. A favourite anecdote recounts how she, fluent in Norwegian, was called on to translate when Norwegian whalers were brought in with hand injuries.

Proficient in things mechanical (she drove one-and-a-half-ton trucks during the war), she thought him very arrogant, and when he asked what she could do, she replied acerbically: "Nothing!"

"At least she was honest," Singer quips. The quip, he says, has been well-worked during their 46-year partnership.

Under Singer's guidance, the hand clinic introduced a number of firsts: the first hand replants in South Africa; a congenital hand clinic at the Red Cross; and the first Brachia Plexus injury clinic. One of Singer's registrars, Robert Broome, now a consultant in the UK, became well known for his expertise in the area.

There have also been innovations attached to Singer's name, among these the introduction of a cast bracing technique at GSH in 1981 to shorten hospital stay after femoral and tibial plateau fractures; a "hot box" therapy to manage hand patients in an atmosphere of dry heat to prevent spasms; and stockinette sleeve dressings enabling patients to move their hands straight after surgery.

Speaking at Singer's official retirement in 1989, Professor Johan Walters said: "Throughout his career Martin has always conducted himself with reserve – always the true gentleman. If Martin could be criticised in any way at all it would be for his modesty and consideration for others. It is this that cost him the academic recognition he deserved."

Among the registrars he has trained Singer is renowned for his uncompromising stance on high standards. "I will accept nothing except striving for excellence," he says emphatically.

And though he has not yet managed to sew up retirement (he's retired three times already), he is watchful, wary of becoming "the old guy" in the hand unit - in the way and interfering. For Singer there is the continued thrill of working with "keen, eager young people with acute brains".

With the Pioneer of Hand Surgery certificate comes a gold badge bearing the IFSSH's emblem. Joy-ThÃ©rÃ¨se, he says, has promised to put it on a gold bar with a pin for Christmas. There are other reminders of his lifetime achievements; in his file is a wealth of correspondence from his registrars, written to thank him for fashioning their careers in some of the best facilities around the world. The unit's first hand fellow, Dr Glyn Bolitho, is a consultant in Atlanta, Georgia. The second fellow, Dr Andrew Flemming, continued as a fellow at Great Ormond Street and is now a consultant in the United Kingdom. And the third, Dr Michael Solomons, now heads the GSH hand unit.

All have been through Singer's hands.