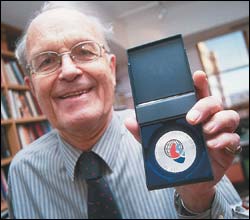 All heart: Emer Prof Lionel Opie has been honoured for his influential contribution to heart research.

When Emeritus Professor Lionel Opie visited India last year, he was flattered to notice that dozens of doctors and cardiologists kept a copy of his book, Drugs for the Heart, within easy reach. It was nice to find, he said, that even doctors in distant India treat their patients according to the recommendations made by him and his co-authors in this pocket-sized but - quite clearly - weighty text.

And it was in recognition of this kind of widespread fluence that the International Society for Heart Research (ISHR) recently laurelled Opie, director of the Hatter Institute for Cardiology Research in the Department of Medicine, with only its third research medal.

According to the inscription on the medal, the award - handed to Opie at the 24th annual meeting of the ISHR in Dresden, Germany, in June - was made "in recognition of his scientific achievements and in gratitude for his service to society". But the award also honours Opie's contribution to the life of the society itself, which he helped found in 1970 and which now boasts outposts in Australia, Europe, India, Japan, Latin America and the US.

"At that time the major conferences were dominated by clinical doctors, many of whom who were measuring pressures in the heart and arteries, leaving aside many research doctors who wanted to get together specifically to discuss their interest in the heart muscle and its energy needs, and why it could deteriorate into heart failure," said Opie, recalling the society's pioneering days. "So those researchers who were particularly interested in the workings of the heart muscle itself got together to form the new society."

Hand in hand with the establishment of the society went the launch of its Journal of Molecular and Cellular Cardiology, with Opie and American cardiologist Professor Richard Bing stepping in as founding editors. The journal - which features research papers on the molecular biology, physiology, pharmacology and pathophysiology of the heart and cardiovascular system - has gone from strength to strength, and today is considered one of the leading publications in research cardiology in the world.

Expect more plaudits for Opie. The sixth edition of Drugs for the Heart is currently in the works, and should get pulses racing by the end of 2004.