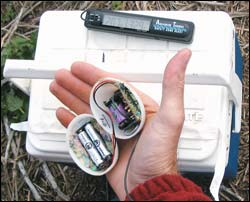 Sunny side up: The false penguin egg reveals its secret centre, an FM transmitter that records the bird's heart rate and reaction to humans near their nesting site. (Photo courtesy of Marienne de Villers.)

Captain Robert F Scott and his Antarctic crew may have used penguin eggs to cook up omelettes in the last century, but they would have been intrigued to discover the newest variety of penguin egg. This plastic-moulded model halves to reveal a small FM transmitter. When the artificial egg is slipped into a nest, it records heart rate, providing useful data for managing human disturbance among endangered seabirds like African penguins.

It's a neat idea and a simple design. The secret FM transmitter sends signals back to the fieldworkers, usually hidden in the scrub nearby. In this case the team included the Avian Demography Unit's (ADU) Dr Marienne de Villers, Australians Dr Melissa Giese (who brought the FM eggs and equipment with her) and Bryan Ries, and Andre Fourie (MAD-Ventures). The site was Dassen Island, one of the bigger local breeding grounds of African penguins (Spheniscus demersus).

Giese (pronounced Geesee) first used the artificial eggs for her research into AdÃ©lie penguins at Davis Station on Antarctica and at Macquarie Island, 1 500 km southeast of Tasmania. A speck in the vast Southern Ocean, the island is the exposed crest of the undersea Macquarie Ridge and is home to thousands of seabirds and mammals that leave the sub-Arctic waters to breed there in spring.

Ecotourism is one of the Western's Cape staple industries and because penguins are popular attractions (especially at Boulders Beach, the most visited mainland breeding site), the Dassen Island study will help conservation authorities plan guidelines for people approaching breeding populations of the African penguins.

Dassen Island supports one-third of the world's population of this species, and was recently opened to tourists. Several other colonies are growing, notably those on Robben Island. But the balance is precarious. For example, the thriving St Croix Island penguin population is vulnerable to oil spillage from increased shipping to the new Coega deep-water port, under construction 20 km east of Port Elizabeth. The island is barely a kilometre offshore.

The NRF and UCT's Visiting Scholars Fund kindly supported Giese's sojourn at the ADU. De Villiers had been in contact with the Australian ever since she began her postdoctoral studies on human disturbance on seabirds. 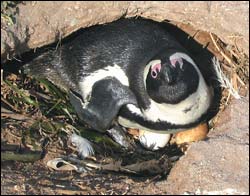 The team took the real eggs (one or two) out of this nest and substituted the artificial egg. The penguin's hardy stare is a characteristic sign of aggression when it feels its clutch is threatened. (Photo courtesy of Marienne de Villiers.)

Wildlife disturbance issues have been at the heart of Giese's research for more than 10 years, particularly disturbance of Antarctic and sub-Antarctic seabird species. (These days she is assistant director of the migratory and marine species section of the Department of Environment and Heritage, Australia, and works on federal policy issues relating to the conservation of seals, seabirds, dugongs and marine turtles). She has used the artificial eggs to very good effect in her research on the AdÃ©lie penguins.

"The novel thing about Melissa's work is the way she measured an animal's physiological response to disturbance, even before visual signs of its reaction," De Villiers said.

The first aim of their study was to describe the behavioural responses of Dassen's breeding penguins to a small group of people (simulating a tourist group) approaching their nests. They also investigated the effects of nest type (burrow or surface nests) and breeding stage (eggs or chicks) on the birds' responses.

"Most birds became vigilant at the start of the approach and were aggressive when approached to five metres," De Villiers noted. "Surface-nesting birds were especially flighty - a quarter of the incubating birds deserted their nests when approached to 5 meters. Most returned soon afterwards, although some did not. The heart rate of birds increased the moment they saw someone approach and doubled when they got close. Sudden movements also resulted in increased heart rates. The heart rates would remain elevated for some time after the approach.

The study is important as physiological changes in response to human disturbance have not been previously reported for African penguins.

During the experiment, the penguin eggs supplanted by the artificial eggs were kept warm in a field incubator. And thanks to the faux eggs, data collection was that much easier. And sensitive though they may be to disturbance, African penguins, thankfully, are not great discriminators when it comes to the form and colour of their eggs.

"They have been known to incubate shells and stones for short periods of time," De Villiers added. The results of this study are being written up for scientific publication and will be sent to the management bodies of African penguin breeding colonies.

De Villiers also hopes to extend this collaboration with Giese to include disturbance studies on sub-Antarctic seabirds.