A home where the heart is 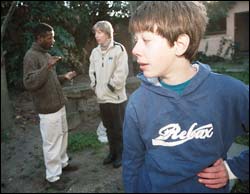 Home sweet home: Dr Leanne Scott (middle) talks to Mangaliso Simons, one of the staff members at Hurdy Gurdy House, a facility that she set up for autistic children such as her 14-year old son Donovan (front).

Dr Leanne Scott's best moments are when she sees her son at peace.

But for Scott, deputy head of the Department of Statistical Sciences, and 14-year old Donovan, an autistic, those passages of calm have been a long time coming. Serenity these days is a home known as Hurdy Gurdy House - located on an Eerste River small holding - that Scott and partner Richard Gaertner have converted into a suitable care facility for Donovan and three other residents who suffer from similar conditions.

For more than a decade, Scott struggled to juggle political activism, careers in research and lecturing, and single motherhood to two children.

Her son's early development was textbook stuff, she recalls. "His birth and milestones were completely normal. He seemed like a normal, very bright little boy." Except that, even by 18 months, he had hardly made a peep.

It was Scott's mother, a remedial teacher, who first suspected that all was not well with Donovan. Initially worried that he might be deaf, Scott took her son to a procession of specialists, and finally ended up at Red Cross Children's Hospital. After about a year's observations and tests, doctors in the hospital's developmental unit diagnosed Donovan with autism, a pervasive developmental disorder that affects three crucial areas of development - communication, social interaction, and creative or imaginative play.

When Scott's second child, daughter Charlotte, was born in 1992, the strain on mother and children reached boiling point. Donovan, obviously, required special care, and a normal house with books and televisions and cupboards were wholly unsuited to his needs. He would obsessively unpack bookshelves, household items would often get chucked out of the window, and Scott would regularly have to scamper after him when he wandered out of the house. He would also use every unsupervised opportunity to smear his faeces across walls and the rest of the house. He was - even's Scott's martinet mother had to concede - impossible to discipline.

Donovan, with no malice, would also bump or throw his younger sister aside in much the same way he would any other object that he considered a distraction or an obstacle. "My memories of Charlotte's childhood were having to hide her away, out of his reach," says Scott, who would often have to bundle Charlotte in her baby chair and secure her on top of cupboards or the fridge.

Partly because she felt unable to cope with his demands, and partly because she was concerned about his future - what would happen if she died, for instance - Scott began scouting around for a suitable facility to place Donovan. She was turned down on all possible fronts, some institutions feeling that they would make little impact on Donovan's behaviour. He would eventually spend five years at Camphill School in Hermanus, a centre for children in need of special care. But it was clear that Camphill would not be able to take care of him beyond school-leaving age, and Scott knew she would have to take him out.

Early in 2001, Scott and Gaertner set up a working committee with two other parents, as well as specialists from organisations such as Alpha School, Autism Western Cape and Vera School, to hammer out ideas about setting up a facility that would cater for Donovan and others, a place where they would have round-the-clock supervision and support, and where they would experience some quality of life.

Scott's idea was to turn her home into such a facility, while she and the rest of her family moved into a smaller house a minute's drive away. In November 2001, Hurdy Gurdy House opened its doors. More than a holding place, residents go for walks or a swim, participate in some arts and crafts activities, and go on special outings, all part of a structured routine

It's an expensive operation though, requiring 10 staff members. Families have to pay R4 500 month for each resident, while one person - a resident prone to bouts of violence - is housed in a secure unit that costs R10 000 per month to run. The house is some R6 000 in the red most months. Families do what fundraising they can, but receive no help from the State, although that may change sometime in the near future. Recently, however, Hurdy Gurdy did receive a windfall of some R180 000 from Scott's doctoral supervisor, Professor George Ellis, who won a purse of roughly R10-million as part of his Templeton Prize for Progress Toward Research or Discoveries About Spiritual Realities in March this year.

Administration and funding worries aside, there's no denying that Hurdy Gurdy House has made things easier on the rest of the family. Scott gave birth to a third child, Hannah, in 2002 (much is made of the fact that she was born nine months to the day after Hurdy Gurdy was opened). And she finally wrapped up her doctoral thesis on legitimacy and decision-making in developmental local government (where and how its money should be spent), and graduated in June this year.

But Hurdy Gurdy House and Donovan are never far away. He spends Saturdays at the family home, and although it's clear he enjoys his stays, he's never quite at ease in an environment that's not quite "Donovan-friendly", says Scott. Charlotte, who still has her hair unceremoniously and painfully yanked, regularly wanders over to Hurdy Gurdy to sit with her brother.

The house, "furnished" to suit its residents who do not take kindly to paraphernalia or distractions, may not be everybody's idea of homey. There's a security gate to the kitchen, a dangerous place in any home but more so at Hurdy Gurdy (medication is also stored in the kitchen). The lights have also been secured to the walls, and the windows all sport shatterproof glass (one of the first lessons Scott and Gaertner learned).

Any doubts that Scott may have about Hurdy Gurdy House slip away when she happens on her son staring contentedly out of his room window. "When I see him there, and I see him sitting calmly, or interacting with others, I know it's a success. I know that it works for him, that it's the right environment for him."

Both, it would appear, have found some peace of mind.